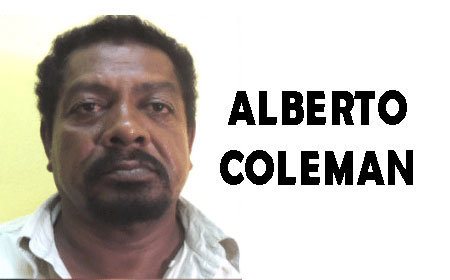 PUNTA GORDA TOWN, Toledo, Thurs. Aug. 27, 2015–Alberto Coleman, 55, a bus driver of Hopeville, was arraigned at the Punta Gorda Magistrate Court today before Magistrate Emerson Banner on the charge of murder for the death of Alberta Cowo Cardinez, 29. He was remanded until October 29.

Police said that they conducted a two-month investigation into the brutal death of the Labor Officer, which led to Alberto Coleman, her ex-boyfriend.

On Friday, July 3, Cardinez’s decomposing body was found in her room on Jose Maria Street in Punta Gorda by her family members who went to Punta Gorda to look for her after she was reported missing on Wednesday, July 1.

Initially, Coleman was detained, but he was later released due to insufficient evidence.

Police announced yesterday that in the early morning hours, they arrested Coleman at his home in Hopeville. He was charged with murder at the police station, and today, Coleman was taken to the Punta Gorda Magistrate’s Court, where he was arraigned on the charge. The directive to arrest him was issued by the office of the Director of Public Prosecutions.