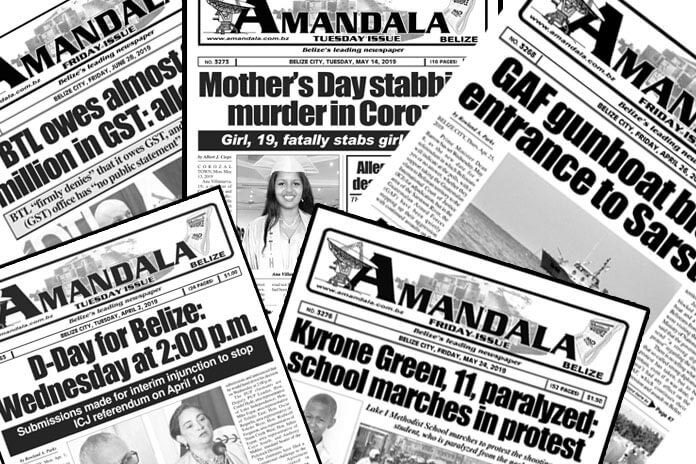 Headlines for April 2 issue of Amandala:

• D-Day for Belize: On Wednesday at 2:00 p.m., submissions were made for an interim injunction to stop ICJ referendum on April 10. Opposition claimants who had filed a constitutional challenge to the Special Agreement, signed by Belize Foreign Minister, Hon. Wilfred Elrington in 2008, were in attendance at the Supreme Court of Hon. Chief. Justice, Kenneth Benjamin, as attorneys from their side and the government’s side made submissions. CJ Benjamin indicated that he will issue a ruling on Wednesday, April 3. The Opposition claimants are Hon. Cordel Hyde, Hon. Julius Espat, Hon. Rodwell Ferguson, Hon. Oscar Requena, and PUP standard bearer for Pickstock, Anthony Mahler.

• Fisherman fined $3,000 for 1 bullet. Shane Morgan pleaded guilty to possession of ammunition without a gun license for a one 9mm round.

• Cousin kills cousin in Sandhill. Deadly violence erupted during an argument between Malcolm Leslie, 19, which resulted in him being stabbed to the chest by James Emmanuel Gibson, 18. 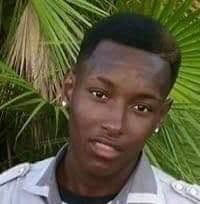 • Barrow flip-flops on Chief Justice’s ruling. The Prime Minister of Belize said, “I was flabbergasted…I would never in a million years have imagined…how on earth a court could stop something like this at the 11th hour…”

• One killed by switchblade; one shot. Marcos Frazer, 24, was stabbed while Eugene Wallace, 40, was shot, in two separate, unrelated incidents.

• Wednesday’s ICJ referendum “dead”. A panel of 3 Court of Appeal Court justices dismissed the Barrow government’s appeal against an interim injunction that was granted by Chief Justice Kenneth Benjamin, in a constitutional challenge by the Opposition, PUP to the Special Agreement.

• Fugitive from Argentina found in San Pedro. Alberto Samid, 71, a businessman was wanted by Interpol on an outstanding arrest warrant and Argentine law enforcement authorities.

• Mother and son alleged police brutality at Mahogany Street Police Precinct. Tifanie Francis said that she and her nineteen-year-old son were beaten.

• Guat Pres. Morales teaches school children to include Belize in Guatemalan map. Morales gave the children a geography lesson when he visited a school in Mariscos Village, in Isabel, Guatemala.

• Chief Elections Officer accused of political mischief. The voter causing the trouble, it is alleged, “is a well-known member of the United Democratic Party” who could not be registered because he reportedly did not have all the requirement documents.

• For the second year in a row, GOB hikes fuel prices at Easter time.

• Belizeans on measles alert. The Ministry of Health issued a press release advising Belizeans on the preventative measures to take to prevent contracting measles.

• GAF gunboat blocks entrance to Sarstoon. The Belize Ministry of National Security has indicated that government will send a strong protest note about the incident to Guatemala. 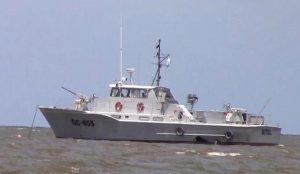 • All roads lead to National Agriculture and Trade Show

• Barrow sets May 8 as ICJ referendum date. The government passed a new referendum law to get around the Chief Justice’s interim injunction.

• Attorney General addresses the media about the Vital Statistics Unit.

• Volunteer soldier shot and killed in Lake I. Hamed Guzman, 23, was walking on Lopez Street, when he was shot.

• 148,500 to decide on ICJ. Belizeans will vote on May 8 to go or not to go to the ICJ to settle the Guatemalan territorial claim to Belize.

• Tragedy at Ocean Ferry Water Taxi, Belize City. A massive explosion claimed the lives of two sisters, Jamiri and Kimberly Guy. Several others sustained burns to their bodies; some tourists were among those injured from the explosion.

• Belizeans vote “yes” to the ICJ. The ICJ will be tasked to determine, finally, the boundaries of Belize and Guatemala.

• Alleged robber shot dead on Albert Street; Shemar Nunez, 23, was shot and killed, after he allegedly pointed a gun at a citizen who was armed with a handgun. Police did not identify the man who shot Nunez.

• 4 adults and 3 minors charged with burglary. The oldest of the accused persons is 35, and the youngest, 12. The adults charged are Wilfred Garbutt, Eric Tillett, Kevin Bodden and Tarique Allen.

• Andrew Caliz, 47, charged with murder; he is accused of killing his common-law wife, Francisca Caceres, 31.

• Trigger-happy cop shoots man “for nothing”. Police shot Vince Martinez inside his home with a pump action 12-gauge. He was released without charge.

• Kyrone Green, 11, paralyzed; school marches in protest. Lake I Methodist School marches to protest the shooting of their student, who is paralyzed from the neck down. 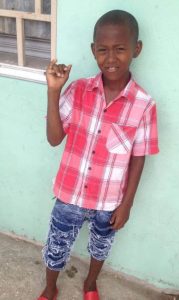 • Husband and wife, both 74, killed in vehicle accident. Audomaro Chan and his wife Romona died when their pickup collided with a 40-foot tanker truck. The accident occurred between Miles 72 and 73 on the Philip Goldson Highway.

• $16,000 reward for jaguar killer; the jaguar was found decapitated.

• Public advisory on illegal peddling of medicines. The Ministry of Health issued a press release advising the public about the danger to health of buying products that are being sold as medicine. Apart from being dangerous, the Ministry said it was illegal.

• Protest at Belmopan Comprehensive School. The students and teachers protested against the school’s board for allowing 17 students who did not meet the requirements to graduate.

• Tony Banner, 28, arraigned for manslaughter. Banner is the father of a 2-month-old baby girl who died from multiple skull fractures.

• No justice for Kareem! “Pito” acquitted of murder of Amandala reporter Kareem Clarke, 27. Mark “Pito” Waight was able to beat the murder charge when a key prosecution witness proved to be an uncooperative witness. Orlet Bevans, 54, took the witness stand and denied that she had given police a statement. 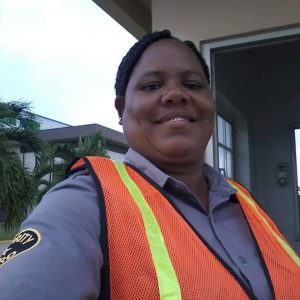 • Bert Vasquez fails at Court of Appeal. Vasquez, 35, failed to convince a panel of Appeal Court justices to admit new evidence in an appeal he has filed against a conviction for forcible abduction, sexual assault and harm for which he is serving a prison sentence of 10 years and 3 years. He was convicted in July 2017 for an incident which occurred in 2012.

• 8-year-old dies in tragic accident. Standard 2 student Gabriella Corrales was knocked down and killed in Belmopan by an SUV.

• The body of Travis Cooke found floating near Swallow Caye. The body had an apparent gunshot wound to the head.

• Noreen Bodden: the last farewell! Bodden, who was a member of the gold-winning Belize softball team in 1974, died at her home in the U.S.

• BTL owes almost 430 million in GST: allegation. BTL “firmly denies” that it owes GST, and the General Sales Tax (GST) office has “no public statement” to make on the matter.