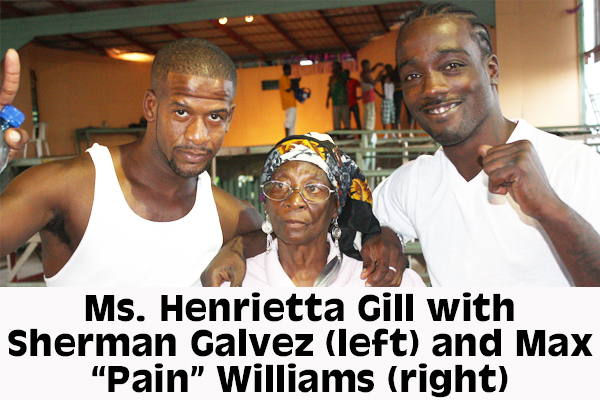 Yesterday afternoon at Bird’s Isle, where the Belize Boxing Federation kicked off its “Road To Glory” boxing elimination tournament to select representatives for next year’s international tournaments, 80-year-old legendary female boxing trainer, Ms. Henrietta Gill, climbed gingerly between the ropes and into the boxing ring, to present her personal trophy of appreciation to bronze medalist boxer, Sherman Galvez, whom she had trained for the first two years of his boxing career before she left Belize for Los Angeles, U.S.A.

Ms. Henrietta, on vacation in Belize, said she had cancelled her return flight, at a cost of $400.00, when she learned that Sherman was “going astray,” and had a good talk with him about his life and boxing. She was pleased that Sherman listened to her advice, and wanted to publicly congratulate him for his achievement.

After the boxing card was completed, we asked Ms. Henrietta, and she graciously agreed, to pose with the two young bronze medalists, Sherman Galvez and Max “Pain” Williams. A humble and soft spoken Galvez said he was very thankful for the appreciation and good words of advice he received from Ms. Henrietta, who has been like a mother to him.

Ms. Henrietta said people sometimes look upon boxing and say it is dangerous. But she said, “This sport teaches them honesty and discipline; it’s hard work, but with honesty and discipline it can make our young men into good citizens, which is important for us to have a strong nation.” “I sometimes work with kids from college, but I prefer to take the kids from off the streets and train them in boxing to be good citizens.”

A truly amazing lady who sincerely loves the sport of boxing, and just as much the young men on whom she bestows her motherly affection and discipline, Ms. Henrietta spent the time during Sunday’s event sitting in the area where the boxers were warming up and preparing for action in the ring.