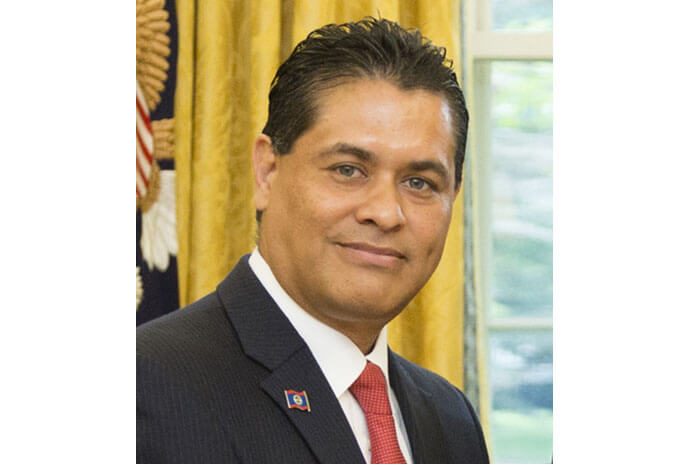 BELIZE CITY, Mon. May 11, 2020– Belize’s Ambassador to Washington, His Excellency Daniel Gutierrez, told Evan “Mose” Hyde, Jr., on the 8th episode of the show, Talk To Mi, on Krem Plus, which is a Youtube channel, that the Belize Embassy in Washington D.C. has been closed for the past three weeks because the entire state of Maryland, USA, is under a state of emergency. Gutierrez said the incidence of COVID-19 is much less in Maryland than it is in New York, but they have been told to expect an uptick in cases of the disease in the near future. In the meantime the three diplomats at the Belize Embassy in Washington are conducting business from their homes in the state.

The ambassador explained that they run five staff offices in the USA — in Miami, Chicago, Los Angeles, New York N.Y., and Washington D.C. — and that although they are not in a position to assist Belizeans in the US financially, since the outbreak of COVID-19 they have been keeping Belizeans and Belizean-Americans in the USA abreast of what is going on at home, and they have streamlined and improved the way passports are issued so that when travel is opened up again things will run smoothly.

Ambassador Gutierrez said his embassy is aware of four Belizeans in the US who have lost their lives because of COVID-19, and that they are watching the situation in Louisiana closely because the medical experts predict that it will be the next epicenter of the disease in that country, after New York, and quite a number of Belizeans live there.

Our ambassador to Washington said Belizeans and Belizean Americans call the embassy often to get information about when they can fly back to Belize, and those with special expertise call to find out how they can be of assistance in alleviating the situation at home. He said it is difficult for Belizeans to send things to Belize at this time, but they will be ready to assist as soon as the situation improves. The US government had not withheld any medical supplies destined for Belize, unlike what some Caribbean countries said had happened to them, he said.

Ambassador Gutierrez said the embassy will be ready when the US economy opens to facilitate those who want to help their families back home, and to be a catalyst to drum up support for Belize in the Belizean-American community. He said he looks to a post COVID-19 Belize that is more balanced in its economic activities, with less of its eggs in tourism and more investment in agriculture and agro- processing. He said the production of electricity is an area that can use more investment because we only produce 50% of the electricity we need.

Ambassador Gutierrez said that in the past the embassy didn’t do all it could to tap into the talent pool we have in the USA, but just prior to the pandemic they had formed the Belize Academic Forum, and as soon as circumstances have improved sufficiently they will complete the documentation of the talent available, in academia, financing, science and technology. It is their expectation that in the next year to year and a half they will be able to deploy this talent resource in the service of the development of Belize.

Another area where the embassy is engaged is in helping Beltraide develop relationships with business persons in the US who would be interested in partnering with Belizean business folk, he said.

Ambassador Gutierrez said that the embassy can’t provide much help to undocumented Belizeans in the US, but they have provided them with Consular ID cards, which are a great help when they have to cash checks and do other business. The ambassador said that 81 undocumented Belizeans were deported in 2018, a number that pales in comparison with the tens of thousands who are deported to other Central American countries annually.