The video of the incident shows that police beat the victim for no reason. 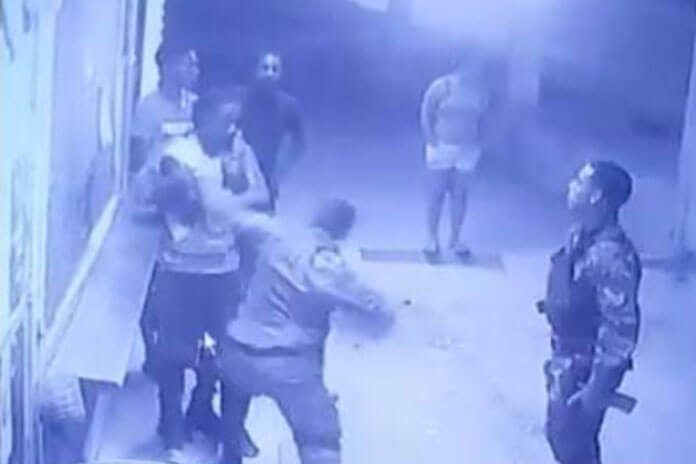 BELIZE CITY, Mon. Dec. 9, 2019– Anthony George Tillett, 27, a vendor and businessman of Fabers Road, Belize City, is recovering from bruises and pain in his neck and abdomen after he was reportedly choked and punched in his abdomen and chest by police at about 7:30 last night while buying at a Chinese store on Fabers Road not far from his house.

Tillett told us today that while he was at the store waiting to be served, a police vehicle appeared in front of the store and a policeman came towards him. He braced himself for the routine search and put his hands on his head as the police approached, he told us.

As the police officer was about to search him, Tillett told the officer to show that his hands were empty before he searched his pocket, because he would not want him to drop anything into his pocket and then arrest him.

The officer, however, told Tillett to shut up and look away as he began the search.

Tillett told us that he told the officer that they are both men and asked him not to treat him like a criminal because he had just gone to the store to make a purchase. He then turned his back to the officer. The officer then went behind him and held him in a chokehold and began to manhandle him.

When he was grabbed, Tillett held on to the bars on the store counter to prevent himself from falling to the ground, because he feared that he would be stomped and kicked, but the officer who was choking him pulled him away from the bars.

After they choked and punched him, Tillett said, they then released him and told him to go.

His family, who has heard about the cop beating him, went to the scene, and he told his brother, in front of the policeman who had beat him, that the officer had just beaten him, and the officer then made an attempt to beat him again, but the other policeman restrained him.

The restraining policeman then told Tillett that they would have to detain him.

Tillett said that he refused to go and resisted, fearing that they would brutalize him further.

His mother, who was now on the scene, convinced him to go with them, that they (his family) were coming behind, and the officers took him to the Raccoon Street Police Station.

Tillett said that he was detained for about ten minutes and was released without charges after making a report of the beating to police at the station.

Tillett said that they then took him back home to Fabers Road.

We asked Tillett why he was beaten, if he was being targeted by police. He told us that because he wears dreadlocks, he is frequently stopped and searched by police, and whenever he sees them coming, he would raise his hands to show that he has nothing on him.

Tillett believes that he was beaten because he stood up for his rights, and asked the policeman to show that he did not have anything in his hand with which to frame him for drugs, which the policeman refused to do.

Tillett told us that he has been beaten before, but not as severely as he was this time. He said that he works with his mother in her business selling food and he is not a violent person or a gang member, and he saw no reason for the beating.

Tillett said that if the policeman had just showed that his hands were empty, there would have been no problem during a routine search. He said that police can do their job without beating people, and that he will sue the police, but does not want the policeman who beat him to lose his job.

He also reminds police that Commissioner Chester Williams said that police can do their job without beating people, and that police and members of the public should have a smooth relationship in the effort to combat crime.

Feature photo: A video footage of the beatdown