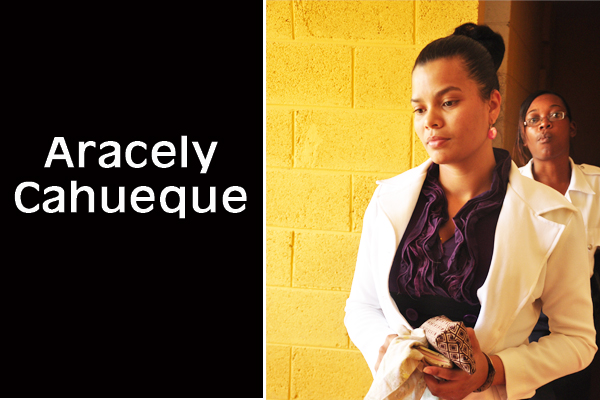 Yesterday, a former beauty queen contestant, Aracely Cahueque, 21, appeared relaxed, clutching a New Testament in her hand as if she was in another world, occasionally leaning backwards on her seat in the prisoner’s dock inside the Belmopan Supreme Court, where a 9-member jury began day two in her trial for three counts of abetment to commit murder before Supreme Court Justice Dennis Hannomansingh.

Cahueque is believed to be the mastermind behind the October 2010 murder of Raylene Dyer, 18, who was beheaded, and her body dumped in a river, from which it was never recovered, according to caution statements the three men accused of carrying out the brutal execution gave to police.

The motive for the murder is said to have been because Cahueque wanted Dyer’s baby girl. The three men whom Cahueque allegedly abetted to commit Dyer’s murder were acquitted last week. One of them, however, Brandon Budna, 28, who is a former University of Belize student, had given two statements to police in which he not only implicated himself, but also linked Cahueque to Dyer’s murder.

In his statement to police, Budna had said that Cahueque had called him three times and had offered him $600 to carry out the hit on Dyer.

When the hearing resumed this morning, Thursday, however, Crown Counsel Kayshia Grant made an application for Brandon Budna to be declared a hostile prosecution witness.

Throughout his testimony, Budna continued to deny that he gave police the statements. He insisted that the information contained in his October 28, 2010, statement was given to him by Assistant Superintendent of Police Hilberto Romero, the lead investigator.

Under cross-examination from Cahueque’s attorney Dickie Bradley, Budna said that he had not wanted to give a statement. “But Romero said to me, ‘you no wan go back da school? Just give the statement.’”, he claimed.

“What is in the statement [that] came from Romero?” Bradley asked him.

“Yes, that is what I am saying,” Budna replied.

In her brief re-examination, Grant asked Budna, “so what you are saying in court today is a lie?

The jury forelady asked him, if he was ever in an intimate relationship with Cahueque, to which he replied, no.

Budna told the court that he and Cahueque had been classmates at UB, but they never socialized.

After he had finished testifying, Budna left the courtroom and Grant immediately made an application to have his statement admitted as part of the prosecution’s evidence.

But this was met with objection from Bradley, who said, “Your Lordship has an inherent discretion, as the judge in the trial, to exclude unfair evidence.”

“I was hoping that you would have asked about the conversation with the DPP and we would have had something,” Justice Hannomansingh told Bradley. “By the time Romero came on the scene, the DPP had already convinced the man to give a statement,” the judge continued.

A legal back-and-forth followed between Bradley and Grant.

Bradley told the court that Romero went to the prison to record the statement as an agent of the DPP and “it was he who acted in bad faith.”

Grant shot back, “the discretion to admit the statement depended on what is legally required. On the issue of whether or not the statement is unfair, there is nothing unfair about the procedure. The DPP has a constitutional responsibility to institute criminal proceedings and as such, does not require any special disposition to approach anyone to be called as a witness in a case.”

Grant maintained that Budna gave the statement of his own free will and the DPP made it abundantly clear that no benefit would accrue from her discussion with him.

Justice Hannomansingh urged Grant to continue with her submission. She responded that she was watching his, the judge’s hand, and he was not writing.

At that point the judge appeared to have become annoyed, telling Grant that it was his court and “nobody tells me what to write. That is why I am up here and you all are down there.”

The judge will rule on Friday whether he will admit Budna’s statement as part of the prosecution’s evidence.

Yesterday morning, Wednesday, Justice of the Peace Ann Lind and the lead police investigator, ASP Romero, were questioned at length to satisfy the judge that indeed, the acquitted man, Brandon Budna, had given police a caution statement.

Apart from the four witnesses who have testified in the trial so far, about fifteen more witnesses remain to testify.

In the afternoon session of the trial yesterday, no less than the Director of Public Prosecutions, Cheryl-Lynn Vidal, took the stand as a witness for the prosecution.

DPP Vidal gave evidence that she had visited Brandon Budna, one of the acquitted men, and obtained a statement from him after he had been charged for Dyer’s murder and was at the Belize Central Prison.

Vidal said she had sought Budna’s assistance to bolster the prosecution in the case against Cahueque, and the only promise made to him was that his statement would not be used against him in his murder trial, which would be heard before Cahueque’s abetment case.

Under cross-examination from Bradley, Vidal told the court that no promise of immunity was made to Budna.

“If I had made an offer of immunity to Budna, a document would have been prepared setting out the terms of the immunity,” she told the court, “and both of us would have had to sign it.”

In his fierce questioning of the DPP, Bradley suggested to her that her prison visit was highly unusual, and that she should have advised Budna to seek legal advice.

But Vidal maintained, “I did nothing wrong.”

Vidal, however, admitted under cross-examination that Budna did incriminate himself, but that she did not think that under the circumstances, it was unfair for him to have incriminated himself.

During the cross-examination, it was revealed that there was no witness to the statement that the DPP obtained from Budna.

But Budna’s visual handicap presented a problem for the court. After a back-and-forth between Justice Hannomansingh and Crown Counsel Kashia Grant, the judge agreed that the Court Marshall, Glen Banner, would read Budna’s statement to him.

The hearing was then adjourned and Budna and Banner went into a private room, where
Banner read his nine-page statement to Budna so as to refresh his memory, before he returned to the witness stand.

During the breaks, Cahueque would come out of the prisoner’s dock and take a seat against the southern wall of the courtroom and appeared to read her New Testament.

When the hearing resumed, Budna told the court, “I gave a statement that I heard from Officer Romero on October 16, 2010, around 5:00 p.m., when I was detained and taken to the Belmopan Police Station.”

Budna told the court that there were “two details in the statement that I had never mentioned to Officer Romero, when the statement was recorded at the Kolbe Foundation.” Budna went on to say that he “cannot recall ever giving a phone number and giving details and description of the alleged victim, Dyer.”

Prosecutor Grant, sensing Budna’s reluctance to testify, told the court that “Pursuant to section 71 (2) of the Evidence Act, Chapter 95, an application is being made for the witness to be treated as hostile, based on the fact that the witness has demonstrated that he is adverse to the prosecution, and that he does not wish to testify in relation to the statement.”

But Justice Hannomansingh urged Grant to be patient and to continue her questioning of the witness.

Afterwards, the court then adjourned to tomorrow, Friday.