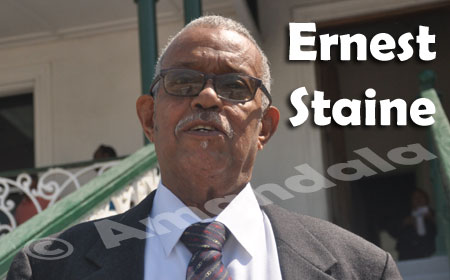 BELIZE CITY, Tues. Feb. 17, 2015–Attorney Ernest Staine was spared a prison sentence this morning when Supreme Court Justice Courtney Abel vacated a suspended committal order this morning, because Staine has provided disclosure of his assets, in compliance with the order of the court.

The 77-year-old Staine, one of the most senior lawyers in Belize’s Bar Association, has been accused of not paying to his client, Rita McField, $230,000.00 that he was holding in an escrow account for her, despite a court order that he do so.

Staine, who was previously representing himself, is now being represented by attorneys Denys Barrow, S.C., his former law partner, and attorney Naima Barrow. This morning he was present in court for the hearing.

Justice Abel remarked that the suspended order had been lifted because “there has been substantial compliance”.

Justice Abel, however, told Barrow, “The seriousness of the court order has not been brought home to the person you represent.”

Barrow told the court that the Bar Association is taking the case very seriously and as a result, several senior members of the Bar were in court.

Barrow also told Justice Abel, “Mr. Staine’s grasp of reality is not to be depended upon as the regular lawyers who come before you.”

During the proceedings, the court ordered Staine to provide disclosure of his bank accounts in two weeks’ time, and stipulated that the titles of properties are to be given as further disclosure by March 17.

Staine, however, is not yet out of the proverbial legal woods, because McField’s attorney, Julie-Ann Ellis Bradley, has indicated to the court that she intends to press on with an application for contempt of court.

Barrow gave notice to the court, however, that he would “make an application to strike out the application for contempt of court. It is scandalous and beyond the reach of the court.”

“We also had an application for contempt for him failing to comply with the order which was made, which he had consented to for the payment of the money by January 31, 2015. That application has been adjourned to March 30,” Bradley said.

“This morning the further application for contempt did not proceed. This application was suspended on the last occasion (February 2) and if he was able to purge the contempt, then it would be lifted. (But) the court considered that the compliance was substantial so the contempt was purged,” Bradley explained.

Bradley added, “Unfortunately, no money was paid. Not even a dollar, and so the clients now have to look to the option of enforcement as to how to recover those monies. That is something that we will have to take the necessary action. Mr. Barrow indicated that he would be making an application to strike out the application for contempt on the basis that no one should be in contempt because they cannot pay a debt.”

Bradley said in the next few weeks, that they will deal with that application, depending on what may be forthcoming and what is done in terms of enforcement.

“At the end of the day, our real concern is to recover the money and that is what this is all about. Much was said about Mr. Staine’s mental state. Taking somebody’s money has nothing to do with your mental state. So I think that is unfortunate that it is something that is being raised, in terms of what is obviously a misappropriation of the client’s funds. So we will take the necessary steps,” Bradley said.

Attorney Eamon Courtenay, S.C., told reporters, in his capacity as president of the Bar Association of Belize, “I have received a number of calls from members of the Bar who expressed their concerns for the welfare of Mr. Staine, who was representing himself, which is never advisable, and so I contacted colleagues and people to agree to come forward to provide assistance to him.”

Courtenay went on to note, “I want to make it very clear that that relates only to the contempt matter. That is a very serious matter, and it appeared to us that based on what we were able to gather, that Mr. Staine was in need of legal representation … the Bar Association is very concerned about this type of order being made against a member of the profession … Mr. Staine was brought before the court at the risk of going to prison.”

The case has been adjourned to March 30.