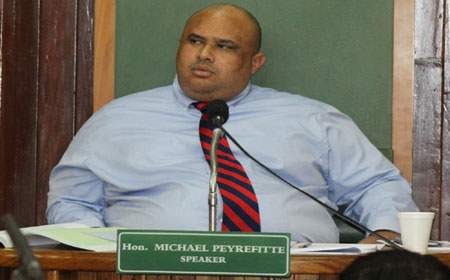 BELIZE CITY, Thurs. May 14, 2020– This morning, Prime Minister Dean Barrow took to the airwaves in a virtual press conference to announce that government has amended some of the regulations in the Statutory Instrument (SI) which gives effect to the national State of Emergency. Government’s amendment of the SI, which comes into effect tomorrow, Friday, May 15, is geared toward a relaxation of the stringent measures that were put in place to prevent the spread of the coronavirus in an effort to open more sectors of the local economy.

By afternoon, Attorney General Michael Peyrefitte appeared on the government’s webcast Ask the Experts to explain the do’s and don’ts of the amendment.

Before he began his presentation, Peyrefitte said that he met a young man who boasted to him that he went to make purchases at a store and didn’t have on a mask.

“There are no points for being irresponsible. If you don’t follow the protocols, you are putting yourself and your loved ones and all of us in Belize at risk,” Peyrefitte said, “There is no reason to be irresponsible, because there is the possibility of a second and a third wave (of COVID-19),” he emphasized.

Peyrefitte explained that members of the Belizean public should use the relaxation of the measures to our benefit, but should “not be irresponsible, because we are still not out of the woods.”

The Attorney General stressed that the 8:00 p.m. to 5:00 a.m. curfew remains in effect and will continue to be in effect until the end of the State of Emergency period on June 30. The curfew for minor children, who are not to be out of their homes by themselves after 6:00 p.m., will also continue until June 30.

For those who exercise, the time for exercising is from 5:00 a.m. to 8:00 a.m. Those persons who are exercising are now permitted to do so without a mask — if they are walking, running, jogging or cycling.

At all other times, it is mandatory to wear a mask and maintain the social distancing protocols. Using his height as a unit of measurement, Peyrefitte told the public to maintain “Peyrefitte’s distance” at all times.

Inter-district traveling is also now permitted. People in the country are now permitted to visit their loved ones in the districts, but are reminded to maintain the social distancing protocols and always to wear a mask.

The public can now use public swimming pools and they can also swim in the rivers and in the sea.

Restaurants which have outdoor dining areas to serve their customers can now serve meals on their premises. The rule which prohibits more than 10 customers at a time from dining on the premises is in place and social distancing must be observed at all times. So, if your restaurant is an open-air restaurant, you are now permitted to open. Other restaurants which are not open-air establishments, can open, but they can only sell food that will be delivered or picked up by customers (take-out).

Spas are to remain closed. Also there can be no waxing or facials at beauty salons, which are permitted to operate, but only for the essentials, such as haircuts, and grooming of hands and feet.

Gymnasiums are to remain closed, as well as rum shops, clubs and casinos. The National Oversight Committee has also not given the go-ahead for the selling of boledo.

All social gatherings involving more than 10 persons are prohibited, and people will be arrested if they are found loitering.

People can now use their private boats to go to the cayes, but masks must be worn.

Churches can hold services, but no more than 10 persons are permitted to attend. Any child above the age of 12 years old can also attend church.

Peyrefitte, using the Belize City Civic Center as an example, said that even if a church building is as big as the Civic Center, the maximum number of persons allowed inside for the service is still just ten.

In explaining that the borders remain closed, Peyrefitte said that persons who come into the country illegally will be tested on the spot by the Ministry of Health, and if they are COVID-19 negative, after they appear in court, and if they are granted bail, they will still have to undergo a 21-day quarantine. “If you cross the border illegally and you go to court and plead guilty, you will go to jail,” Peyrefitte said.

Peyrefitte also announced that Belizean students and other Belizean nationals can now return home. Peyrefitte said that beginning on Monday, May 18, the Ministry of Foreign Affairs will post on the government’s COVID-19 website the forms for those Belizeans who wish to return home.