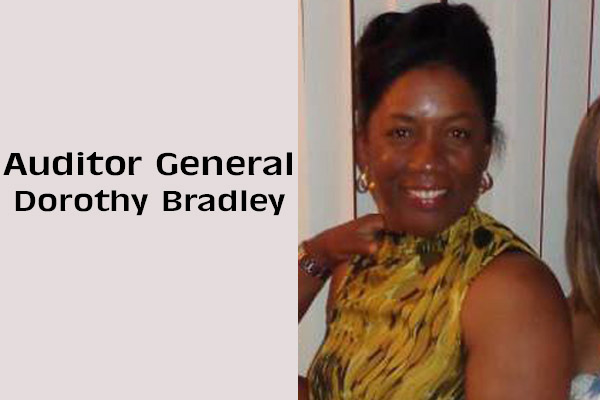 Auditor General Dorothy Bradley did not hold a press conference today, as we had reported in Monday’s issue of the Amandala, but she invited members of the media who had made previous requests for an update on the investigation of the “Penner Passport Scandal” to “sit in” with her to discuss – in general terms – how the Audit Department goes about carrying out such investigations, because, as we understand it, she cannot discuss the specifics of her current investigation at the Immigration Department at this point in time.

Bradley also made it clear that she is not presently in a position to discuss the findings of her investigations or to hold a press conference until she has completed her report and handed it in to Minister of Immigration, Hon. Godwin Hulse, and the Prime Minister, Hon. Dean Barrow. Until the enquiry into the Immigration scandals, which began on October 28, 2013, is completed and the final report is submitted, no detailed information can be released, she noted.

Still, she mentioned that her team of auditors – who are based in Belmopan – has completed the review of files for the period January to September 2013, and that they are now looking at files for 2012. We understand that, based on information found, the Department reserves the right to call in any person of interest, including Ministers or senior government officials, for questioning when the time is appropriate.

Bradley explained that the audit which they are doing is more “compliance-based,” and that the department intends to audit areas such as the issuing of passports, during which they will vet applications to verify if any regulations were violated.

At the end of that process, the Auditor General said, they will have to address the public and outline what they found, but at this point, they are only going through what was presented to them.

So far, we were told, they have not met any ‘road blocks’ – so to speak – in their investigations, and they are currently sifting through the numerous files and gathering all the necessary information that they can access, so that the final report can be issued. If all goes well, that report should be near completion by the end of February 2014.

It must be noted that so far, only the Auditor General’s office has provided some sort of insight into the substance of their investigations into the suspected irregularities that had been occurring at the Immigration and Nationality Departments.

The public has been under the impression that there have been multiple investigations that have been proceeding simultaneously since the news of the scandal first broke last September; however the Financial Intelligence Unit (FIU), the police and the Ministry of Immigration itself have all been less than forthcoming in the provision of any type of updates to the public.

A second investigation – by the police department — was ordered when more irregularities were unearthed, and after there were allegations of burning of files and missing files from the embattled Immigration Department. The police investigation, however, was focused on the files that were reported missing, and not on the people who were being accused of corruption and wrongdoing, the most prominent of whom was the former Minister of State in the Ministry of Immigration, Hon. Elvin Penner.

Subsequently, the Financial Intelligence Unit (FIU) announced that it had stepped in to do its own investigations, but to date, there is nary a word about the status of those supposed investigations.

Unlike other bureaucratic investigating agencies, the Auditor General emphasized that she is open to any questions or concerns regarding the work that her office carries out.