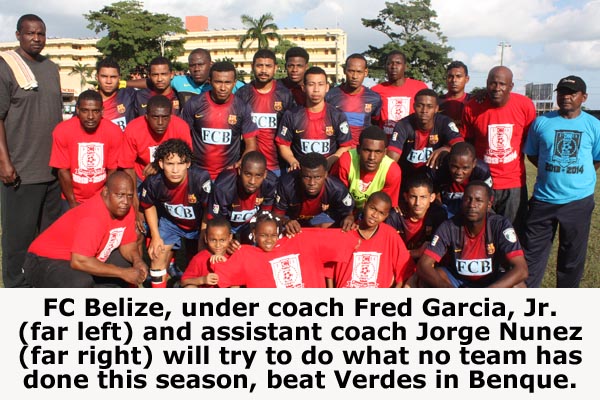 Week 1 of the Premier League of Belize Belikin Cup Opening Season 2013-2014 home and away semifinal series took place over the weekend on Saturday night and Sunday afternoon.

In the first semifinal on Saturday night, January 18, at the Isidoro Beaton Stadium in Belmopan, home standing #3 seed Belmopan Bandits registered a commanding 3-0 win over #2 seed Belize Defence Force (BDF). It was the most goals that the normally very tough BDF has given up all season long, albeit 2 of the Bandits’ goals came from the penalty spot. The Bandits, meanwhile, had been scoreless in their last two regular season outings, but they found their scoring touch, especially striker Deon McCaulay, when it mattered most, at playoff time. The first goal was a penalty conversion by David Trapp at the 23rd minute, after striker David Madrid was taken down by BDF defender Rickey Rickets. The second, an easy tap in by Deon McCaulay, came at the 69th minute when BDF goalie Derol Roches couldn’t hold on to a hard cross goal pass from the right side. And the 3rd was another penalty conversion, this one by McCaulay at the 77th minute, after he had made a threatening run down the middle toward the BDF goal.

On the BDF end, rookie midfielder Ambrose “Fubu” Thomas had some exciting runs, but his small frame took some punishment from close, physical marking, prompting his teammates to urge him to pass more and avoid too many one on one confrontations. Striker Shane Flores got a couple good looks at goal, but couldn’t find the target.

It was a very physical game, with many appeals to referee Christopher Reid from both sides, and requiring him to have man to man talks with a pair of players in at least two instances. In a scary moment for the Bandits, McCaulay was helped off the field following a hard tackle at the 88th minute, but after the game he assured us he will be back for game 2 this Saturday. Near the end, already in injury time, the match was abruptly suspended when the floodlights on the eastern side suddenly went off. After a couple minutes and the lights still off, referee Reid opted to blow the long whistle and call it a night.

The BDF squad was demoralized by the loss, especially by the second penalty call, which was not as clear cut as the first; and they will need to regroup to regain their respect, even if they are not able to surmount the tremendous 3-goal deficit that they face in the return match in ‘Griga. BDF coach Gregory “Paisa” Cantun said after the game, “2-nil is not such a big deal, but that extra penalty, which we don’t agree with, really hurt us. 3-nil will be extremely difficult, but we are not giving up. Anything is possible.”

In the other semifinal yesterday, Sunday, at the MCC Grounds in Belize City, it was a 0-0 stalemate between #4 seed FC Belize and the visiting #1 seed Verdes FC from Benque Viejo Del Carmen in the Cayo District. Their last regular season meeting at the MCC was a 1-1 affair in which veteran legend Norman “Tilliman” Nunez thrilled his many city fans with a spectacular first half goal. In their other meeting at the Marshalleck Stadium, they were tied at 1-1 until the 80th minute, with FC Belize playing a man short due to a red card ejection, before Verdes scored 3 more, including 2 penalties, for the 4-1 final.

With Verdes and FC Belize in the playoffs, Belize City fans were assured of at least one more chance to witness Tilliman in action, and they turned out in impressive numbers, despite the $15.00 price tag at the gate. In what appeared like missed timing, the national anthem was played with the teams still on the sideline, before they had marched to the center of the field. There was no prepared ceremony or token of appreciation to Tilliman; perhaps his agent, Press Cadogan’s claims that he will be back for one more year thwarted any such plans. We don’t know.

Tilliman did not score, as he did last time for Verdes against FC Belize at the MCC, but he drew considerable attention in midfield to keep him from establishing control of the game, and much credit is due to the stalwart marking skills of another veteran Mark “Kelo” Leslie.

Both teams were committed to a stern defensive posture throughout the game. Verdes has only given up 10 goals in 12 regular season matches, their most allowed being 2. FC Belize has had a topsy turvy year, after building a reputation for a very stingy defense, allowing all of 19 goals, and that despite some fine goalkeeping from last season’s Best Goalkeeper, Glenford Chimilio. However, yesterday, following a reported good week attendance at workouts, head coach Fred Garcia said before the game that his team is finally coming around to the level of commitment he wants to see on defense. And they proved it with 90 minutes of tough team defensive football. On offense, neither team could get their way.

On Verdes’ side, the young and talented Gilroy “Bredda” Thurton was intimidated by the physical play, and may have raised the suspicion of referee Amir Castillas with his frequent flops, resulting in his not getting a call or two he probably deserved. And early in second half, his striking partner Marlon “El Matador” Meza appeared to pull a hamstring, after much pressure from FC Belize left defender Shannon Flowers. His replacement, Julio Ayala, was no more successful.

For FC Belize, the rookie Devaun “Beckham” Zuniga was overpowered by the tough Verdes defense, and their lead striker Jarret Davis was also effectively contained. After Steven “Breds” Baizer replaced Beckham, and Germaine Foster substituted for midfielder Jorge Alexman, Jarret dropped back to midfield to add extra muscle to the FC Belize team defense, while Foster joined Breds up front. But neither could penetrate the Verdes defense.

These two teams are a very tough match-up right now, but in Verdes home town of Benque Viejo del Carmen, where they haven’t lost all season long, they will be feeling good going into the decisive final game of the series. For FC Belize, their performance yesterday is a real confidence builder, where there traditional defense is concerned. They just need to now find a way to score goals at the Marshalleck.