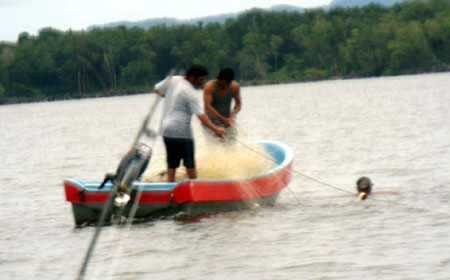 2 thieves held up 5 fishermen and stole their catch

BELIZE CITY, Fri. Feb. 15, 2019– Five fishermen from Copperbank, Corozal District, were held up and robbed at gunpoint by two pirates, one of whom was armed, and an assortment of the seafood the fishermen had caught, worth about $3,200, was stolen.

The two thieves then drove away in a speedboat.

Lloyd Flores, one of the five fishermen, told police that at about 1:30 yesterday afternoon, Thursday, they were sailing from Belize City back to Copperbank, when about a mile from Belize City, which is almost right in front of the harbor, a white speedboat, in which two men were traveling, drove up to their boat.

One of the men in the speedboat then pointed a gun at them. The bandits then boarded the fishermen’s boat and at gunpoint robbed them of their produce.

Police and the Coast Guard are now searching for the thieves.

However, this is not the first time that sea robbers have pounced on unarmed sea workers. In 2016, a group of coastal pirates who prowl the high seas in southern Belize, in the Stann Creek District area, targeted fishermen.

The Coast Guard thus made the apprehension of the pirates a high priority.