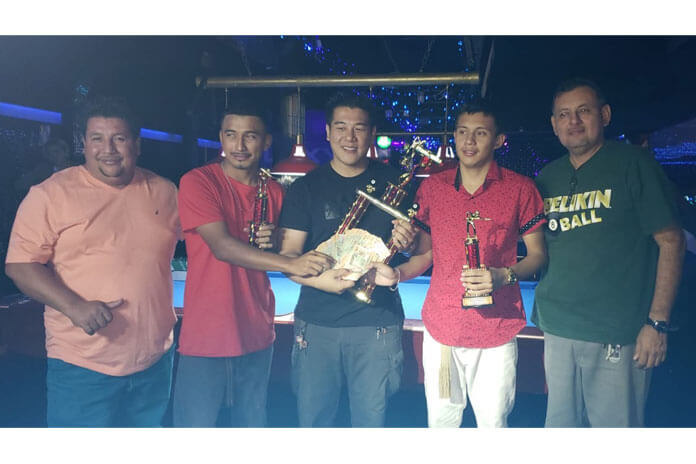 BELMOPAN, Thurs. Mar. 12, 2020– Mr. Marvin Cardona organized and sponsored a massive 2-man team Billiards tournament in collaboration with the Belize Billiards Sports Federation (BBSF) on March 07 and 08 at the classy Luxy Sports Bar in Belize City. This tournament had participants from Belize, Nicaragua, Guatemala and El Salvador. Games played in this tournament were: 9-ball in the winners bracket to start off, 10-ball in the losers bracket, and in the semi-finals and finals it was 8-ball. Here are the results:

1st Place Prize – $2,700.00 + individual and team trophies. Two young sharp shooters from Corozal, namely Immer Lima and Luis Valdes sailed away with the first prize. These players were undefeated to the end. Interesting, and of note is that Immer Lima, who is perhaps the best- youngest player in the country, did not lose a game, and was there every step of the way to bring back his team when it looked like his team was in trouble.

2nd Place Prize – $1,350.00 + individual and team trophies was won by Joel Aldino and Ailton Linarez, also of Corozal, and who are no doubt two deadly players.

5th Place – trophy was won by Francisco Rodriguez of El Salvador and Hector of Caye Caulker.

Obviously, Corozal players are proving to be top shooters in the country.

Thanks extended to Mr. Eric Chang (owner of Luxy Sports Bar), Marie Sharp Pepper, the officials, and everyone who contributed to make the tournament a success.  Big-up Mr. Marvin Cardona!!