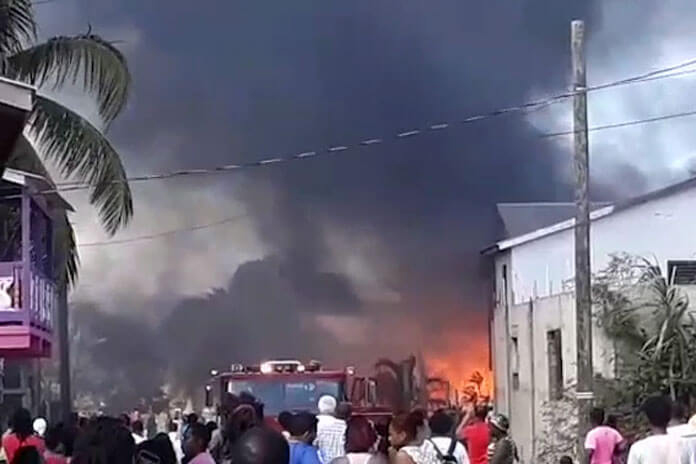 SEINE BIGHT, Stann Creek District, Tues. Feb. 18, 2020– Fire completely destroyed a barracks in Seine Bight comprised of 14 rooms, and a house near the barracks, at about 2:30 this afternoon. As a result, about 30 persons are now homeless.

Those persons are now being housed at the Seine Bight community center, and an investigation has been launched to ascertain the cause of the massive fire. Luckily, no one was injured.

Kirwin Ramirez, the Seine Bight Village chairman, told the media that he was coming from Placencia when he saw smoke coming from the timber barracks, which measured about 35 feet x 45 feet, and was owned by Mary Palacio, 53, of Punta Gorda.

The caretaker of the building was Kenisha Avilez, 25, of Seine Bight.

Ramirez said that other people were already organizing a bucket brigade when the house became engulfed in flames, which quickly burnt out of control. The situation became dangerous when the raging flames ignited a nearby lamppost and the wires began to burn and spark.

The local fire engine arrived, and the people helped the firemen to put out the fire, the cause of which has not yet been ascertained. Ramirez said that the workers who lived in the barracks were at work at the time, and their children were at school.

The value of the building is estimated to be about $75,000. The estimated total loss resulting from the destruction of the families’ belongings has not yet been ascertained. It is expected that the National Emergency Management Organization (NEMO) will assist the families while they are being housed at the community center.

Members of the public who want to help the devastated families can call 630-7301 to make their donations.