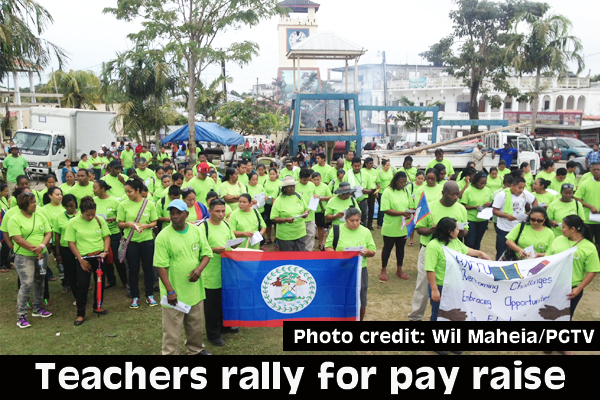 Speaking at the close of the Special Sitting of the House of Representatives today, Prime Minister and Minister of Finance Dean Barrow announced that teachers and public officers would be getting this July, but retroactive to April 2014, a 4% salary adjustment, which he said would amount to an estimated $24 million.

Barrow was responding to a statement from Ivan Ramos, the Opposition People’s United Party area representative for Dangriga, a teacher of 20-plus years, who spoke of the recent rallies held by the Belize National Teachers’ Union (BNTU), saying that the teachers deserve the raise they have been asking for.

Barrow said that, based on the Government’s initial calculations that every 1% increase would translate to $5.7 million, they were estimating that the Government may be able to pay a 3.5% salary adjustment to teachers and public officers. However, the unions have said that by their own calculations the amount needed is less than the Government figure, which means that the adjustment is looking more like 4% — a total increase of 6% for teachers and public officers come July, if the 2% increment is added to the 4% salary adjustment, Barrow said.

However, speaking to the media on Tuesday, representatives of the BNTU insisted that the salary adjustment and the annual increments are two very separate matters, since increments are only paid to some workers on the basis of a performance assessment. Open vote government workers, for example, don’t even get increments, although they would be entitled to this year’s salary adjustment.

Barrow said that all across the region, other countries have been facing financial hardships which have forced retrenchment and wage freezes. He said that Barbados is retrenching 3,000 public officers, and Grenada is imposing a 3-year wage freeze, ahead of an arrangement with the International Monetary Fund (IMF).

Belize, he said, managed to restructure its debt without going into an IMF arrangement and because of that, the Government can now afford to give a pay raise.

Johnny Briceño, the Opposition People’s United Member for Orange Walk Central, pointed to statistics recently released by the Statistical Institute of Belize (SIB), which indicate that for three quarters in 2013, the economy expanded a mere 0.4% – a performance he described as “anemic.” Meanwhile, unemployment is said to have declined by two percentage points—data which Briceño said do not add up.

Briceño said that things are harder under this United Democratic Party (UDP) government, and people are left with very little after paying their food bill—which has shot up due to high inflation on items such as beans and poultry.

“It would be sad to know that we are a ‘ketch and kill’ nation,” Briceño said, adding that the average wage of $900 is not enough for people to lift themselves out of poverty.

Briceño contrasted the latest unemployment rate of 14.2% with the 8.5% rate of unemployment he said was registered back in February 2008, when the UDP took office.

He said that the double-digit unemployment rate is “unacceptable in 2014, when we have a billion-dollar economy.” Briceño said that he agrees with the Belizean singer, Dan Man, that “all of us Belizeans, we are tired of having nothing!”

In addressing the point by Briceño about “the economy almost flat-lining for three quarters,” Barrow said that the numbers are beginning to look more positive and he is sure they will be higher when the figures come in at the end of the fiscal year in March.

The Prime Minister said that during the last quarter of 2013, Government embarked on “a magnificent spending splurge” which, he said, will “drive the economy hugely forward.”