Barrow urges OAS not to give in to Guatemala’s bullying 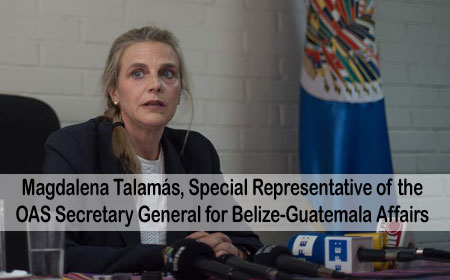 BELIZE CITY, Fri. Sept. 9, 2016–Guatemala has stepped up its campaign against Belize in regards to the shooting death of a Guatemalan minor in the Chiquibul in April, and apart from persisting that the case should be heard by the Inter-American Commission on Human Rights, officials of that country are taking the Organization of American States (OAS) to task over a recently released independent expert report into the killing.

Whereas it had been announced that the Secretary-General of the OAS, Luis Almagro, would have issued a statement on the report, we note that so far, none has been forthcoming and instead, his representative on Belize-Guatemala affairs, Magdelena Talamas, was dispatched to Belize and Guatemala to formally present the findings.

The Government of Belize has said that the report, prepared by experts from the US and Mexico, vindicates Belize by firstly indicating that the minor was not killed by the Belize Defence Force, and secondly, by presenting evidence to show that the Belize patrol did come under fire, as they had alleged in their self-defense plea.

However, the Guatemalan Government insists that the report is lacking and its findings inconclusive.

Guatemalan Foreign Minister Carlos Raul Morales not only rebuffed calls from Belize Prime Minister Dean Barrow for an apology; he went on to publicly demand the removal of Talamas after she called for both parties to reconcile and press ahead with peace-building work.

Today, Prime Minister Dean Barrow said that he was not surprised by Guatemala’s refusal to apologize to Belize for claiming human rights violations by the BDF.
“I think if the Secretary General were to accede to that demand, he would be giving in to bullying, but it’s a matter for him,” Barrow told the press.

Barrow said that Belize has already put on record its position in this regard.

He added that, “…it’s unfortunate that a process to which we both agreed… which has now resulted in a vindication of Belize, is not accepted by the Guatemalans. But there is not a great deal we can do about that.”

The fact is, Barrow said, the international community is quite clear now about what has happened and of the vindication of Belize.