BDF presses ahead with conservation posts to curb illegal activities 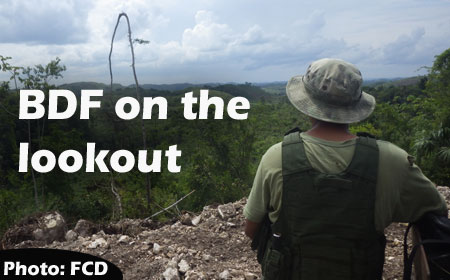 BELIZE CITY–Belize Defence Force (BDF) Commander David Jones told Amandala today that BDF soldiers and police are already manning the newly established conservation post at Valentin near the Belize-Guatemala border, and they are pressing ahead with the construction of two new conservation posts at Caballo and Cebada—all in an attempt to curb illegal logging and other illicit activities which have been rampant inside the Chiquibul Forest.

Jones expects the next phase of construction to be a challenge; however, he is hopeful that those new posts could be completed even before year-end. The major challenge stems from the fact that while there was a pre-existing road leading to Valentin, making transportation of construction materials easier, the other two sites have no access roads.

Currently, the BDF does not have the capability to airlift anything into the area, and so they will be working with the contractor, Pine Lumber, to determine how best the project could be implemented. Jones said that because of the difficult terrain at Caballo and Cebada (located roughly 8 miles apart), the cost of setting up these two new conservation posts will be significantly

higher than the cost of the Valentin post. Jones said that they are meeting with the contractor next week to advance the project, which is being financed by the Government of Belize through the Ministry of National Security.

Commander Jones reported to us that there has been a cooling off of illegal incursions, usually perpetrated by Guatemalans living in La Rejoya, very close to the Belize-Guatemala border.
According to Jones, the Valentin camp was of highest priority, because of the frequency of incursions which had been happening in that area. He said that a program implemented by Guatemala to provide stipends for the families in that area, to dissuade them from entering Belize illegally, has helped.

Jones added, however, that there are still Guatemalans coming illegally into Belize, and some of them even ask permission from the BDF to come across, but the BDF refuse them.

“Stepping up the BDF presence there has helped,” said Jones.