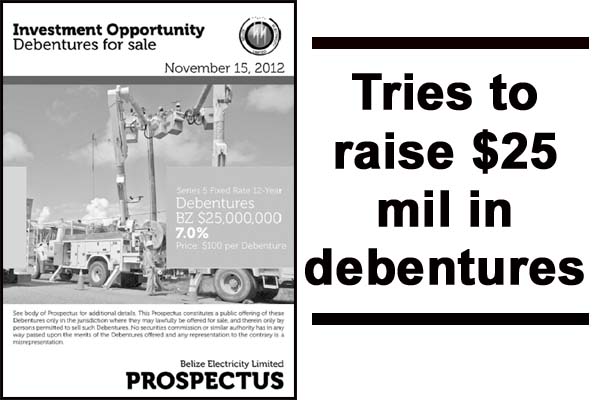 The Belize Electricity Limited (BEL) announced this afternoon that it has launched its $25 million series 5 debenture offer, which proposes “a highly competitive interest rate” of 7% over 12 years through to 2024.

According to the company, the 250,000 debentures cost $100 each, and subscriptions must be for a minimum of one debenture.

“With the proceeds from this debenture offer, the company will in whole or in part refinance its $16.9 million series 1 debentures currently bearing interest at 12% and maturing on December 31, 2012; as well as help fund the company’s medium term needs,” BEL explained.

The prospectus, which can be downloaded from http://www.bel.com.bz/001_Series_5_Debenture_Prospectus1.pdf, contains more details, including the company’s financial forecasts up to 2016.

The debenture offer, which opens today, runs until December 17, 2012. The company pledges that certificates for allotted debentures will be issued within 3 months after the date of the letter of acceptance.

BEL notes that it will shortly issue $10 million in preference shares to the Social Security Board (SSB), which has also agreed to purchase $5 million in debentures.

Speaking with Amandala this week, SSB chairman Doug Singh said that the Social Security Board had already completed all its internal processes to pass over the financing to BEL, but BEL had not yet requested the disbursement. Singh had said that the SSB would make up to $10 million available to BEL in the form of a secured loan until the parties are able to conclude agreements for both the preference shares and the debentures.