Belize accedes to the UNCAC 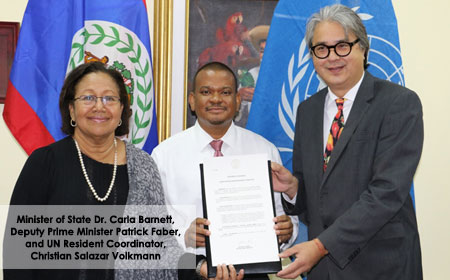 Due to the absence of Prime Minister Dean Barrow, whose return to Belize was delayed due to medical reasons, Acting Prime Minister Patrick Faber signed the instrument of accession for the treaty on his behalf.

The signing was witnessed by members of the Belize Chamber of Commerce and Industry, one of the social partners which had been pressing the Government to sign on to the international accord. The Belize National Teachers Union (BNTU) also included the signing of the UNCAC as one of the key demands of The Barrow Administration when they went on strike on October 3.

“We’re a little bit late in coming but we’re here and it is a pleasure for me in particular to be given the honor to sign today,” Faber said, adding that “…signing unto a convention like this will help us in the fight against corruption but more importantly the fight against poverty.”

Volkmann said “…this is the start of a lot of work in terms of modernizing the state so that [the] state and society can be fit to be more efficient, more transparent, and in that sense minimize and even eliminate corruption….”

“I can assure you and the people of Belize that the UN, particularly UNODC and UNDP, we are ready to help Belize on its way to bring in the experience from other countries, to bring in the technical expertise that is needed to move forward on a way that in fact is a task of the Belizean government, the Belizean society, to find the right ways to end corruption and be more transparent,” the UN rep also said.

According to the UN, the Convention (which can be viewed at http://tinyurl.com/uncactreaty) entered into force on 14 December 2005.

At its last Sitting, the Senate ratified Belize’s accession to the convention, in advance of the signing, so that the convention takes immediate effect.