In part one of this two-part series about the present-day Caribbean campaign for reparations, we travel to Belize to learn about a people’s-led reparations gathering and the historical wrongs committed. 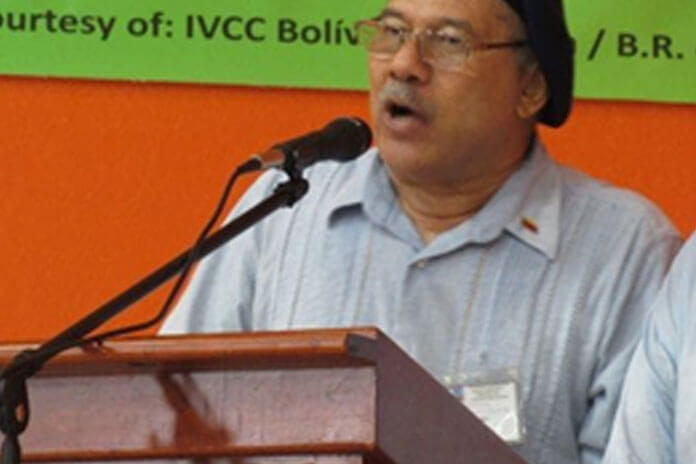 In mid-October the Belize Commission: Initiative for Justice and Reparations (BCIJR), called on Belizeans of all oppressed backgrounds to gather at the Belmopan Convention Center for the Second Annual Popular Justice and Reparations Convention. Belizeans across racial and ethnic groups have constituted the only popular reparations initiative in the Caribbean in support of the Caribbean Community and Common Market (CARICOM) Reparations Commission created in 2013. At this year’s convention, approximately 150 African Kriol, Garifuna, Mopan, Yucatec and Q’eqchi Mayan as well as East Indian peoples discussed the historical wrongs carried out against them by European colonial powers and what reparations means to, and for, their communities.

For two consecutive years, women, youth, elders, farmers, fisher folks, cultural workers, academics and union leaders, among others, have gathered to discuss an action plan for reparations. These distinct communities share interwoven histories of how Britain, France, Spain, and other colonial empires exploited, enslaved, raped and carried out genocide against their peoples. Not unlike the rest of the Caribbean, Belizeans’ ancestors were kidnapped, forced to migrate and exploited from a variety of places such as India, St. Vincent, the Venezuelan Orinoco Basin, and the African continent, as well as within Belize itself.

While the process to repair the damage that European colonialism has caused often seems endless, overwhelming and out of reach, Belize’s people-led process serves as a unique organizing experience in the Caribbean, uniting so many different peoples.

Belizeans Fight for Justice and Reparations
The consequences of Europe’s criminal and unjust acts are evident throughout Caribbean societies today. “We continue to live with that damage to this day. Our health is below standard, poverty is widespread, our education system fails to prepare us as confident people who speak our distinct languages and are knowledgeable about our vibrant histories, and the more than 500 years of suppression we have endured and are still enduring,” expressed the BCIJR.

This year’s gathering lasted one day, with delegates from all over the country taking advantage of each moment to move forward their strategies for reparations. People in attendance at the convention were asked to identify their ancestors and were charged with recovering histories about the damage done to their peoples during European colonization of the Americas as well as the invasions across Africa and Asia. Testimonies reflected on centuries’ long trauma, documenting how ancestors were kidnapped and endured treacherous voyages, forced labor exploitation and rape, and were forever distanced from their homelands.

“Wat a ting dehn European governments did to us. They were the owners and traders of enslaved Africans. They were the ones who instructed that. That the indigenous communities be wiped out. They were the ones who made it a law. That our African ancestors can be enslaved. Wat a ting fi we ancestors gaan troo, Because dehn neva white,” recited Garifuna youth Alexis Casimiro from “Reparations Deh Ya,” a poem by Myrna Manzanares an African Kriol delegate from the maroon community of Gales Point, Manatee. The piece contributed to opening the day’s events and brought together the voices of women from Garifuna and African Kriol heritages, unifying the African Diasporic experience.

While Venezuela is not a CARICOM member nation, Ambassador Perez spoke of his country’s revolutionary support for reparations. He referenced the rebellious legacies of independence leaders Simon Bolivar, Guaicaipauro and Negro Miguel in this multi-national alliance embracing the importance of remembering the ancestors. Ambassador Perez exclaimed, “They [colonial powers] continue to ask that we forget our ancestors. We must fight for our peoples’ dignity so our ancestors can finally rest in peace. We will never forget and we cannot forgive.”

The demand for reparations from European nations serves as a means toward national and transnational healing as well as a step in the direction toward self-determination. The campaign resonates with peoples across the country. However, for some they must constantly defend their right to reparations, since the histories of their oppression are less known to Belizean society.

As one East Indian delegate voiced, “The whole indentured system was an injustice to our people. That system was a crime. Indians were brought to work in near slavery conditions. Many have said that East Indians are not deserving of reparations because we came of our free will. But we were lied to, kidnapped and forced to sign contracts. We lost our language, we lost our names.” Not without its challenges, these communities are constantly at work to overcome colonially imposed racial and ethnic barriers. East Indian delegates have expressed how they came to see that African and Indigenous peoples have suffered similar oppressions and must work together to build a strong, united front, albeit a difficult process; while, representatives of the different Mayan peoples have reflected that the campaign for reparations has allowed them to work alongside other Mayan peoples.

Along with the international presence of Venezuela, in special attendance were organizers from the Black Fraternal Organization of Honduras (OFRANEH in Spanish), whose participation tied together the internationalist vision of the movement for reparations.

The delegates represented Garifuna women and youth of Honduras and spoke of their recent recuperation of 1200 hectares of land in Vallecito, Colon, where they are building an autonomous Garifuna community based on ancestral ways of life. They also described their ongoing struggle against neoliberal strategies implemented by the Honduran state with the goal of eradicating their communities. They ended their participation by voicing their commitment to support reparations for Belizeans.

“When they [powers at be] realize that we have begun to organize for what is ours, they start to offer us the moon and the stars. But if the moon and the stars do not serve any purpose to us, if we have not asked for the moon and the stars, we are not obligated to accept them. We must fight for what we deserve,” conveyed a youth from Ofraneh, reinforcing the need for Belizeans and the rest of the Caribbean to remain resilient ahead of this struggle.

RELATED: In Part II, we will delve deeper into CARICOM and the Belizean people’s specific demands for reparations as well as their push for the government to actively support this cause.

Pambana Bassett is an organizer from Harare, Zimbabwe and New York City, New York. She is a member of the Chiapas Support Committee based in Los Angeles, California, and she is currently organizing around food sovereignty, reparations, African and Indigenous popular education, and land rights with grassroots organizations in Belize, Central America.