Belize asks Venezuela for 1.5 million barrels of fuel for 2016 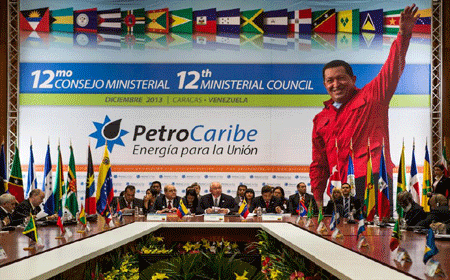 BELIZE CITY, Thurs. Feb. 4, 2016–Belizean consumers used almost 50 million gallons of fuel in 2015, with the bulk of that being sourced from Venezuela under the PetroCaribe accord. Despite a change in political administration in Venezuela last year, Belize has not suffered any cutbacks. This is according to John Mencias, deputy chairman of APBEL, the joint partnership between Belize and Venezuela which handles fuel purchases for Belize.

The last shipment arrived late January and a new shipment is due to arrive tomorrow, Friday, February 5, said Hernan Herrera, commerce and supply manager of APBEL. It is expected that once that fuel reaches the pumps, the price per gallon will be even lower than the price on the last shipment, as world market prices have continued to fall. The price of regular gasoline in Belize City is $7.68 on the gallon, down from $8.20. The December price for premium gasoline, imported from the US market, continues to hold at $9.30 a gallon.

The cost to consumers has fallen by more than $100 million, and the financing which the Government of Belize has received under the program has, likewise, fallen substantially. Mencias said the receipts in 2015 are exactly half what they were in 2014 – $55.4 million versus $110.8 million.

By contrast, in 2013, the Government of Belize was able to retain BZ$135 million of what consumers paid at the pumps for Venezuelan fuel. These are actually loan funds which the Government will have to repay under a 25-year loan agreement at virtually no interest.

The Government’s upfront payments to Venezuela for fuel has, despite falling loan proceeds, remained virtually the same, because of the design of the program. Mencias said that it has stayed within the region of US$40 million to US$50 million a year.

Although Venezuela can cut the PetroCaribe program with 30 days’ notice, Mencias said that PetroCaribe has served as a kind of foreign policy anchor for Venezuela and he does not think it would let go of those moorings. He told us, that export under PetroCaribe amount to only 4% of that country’s total fuel exports, of which Belize’s portion is relatively small compared to other countries in our region.