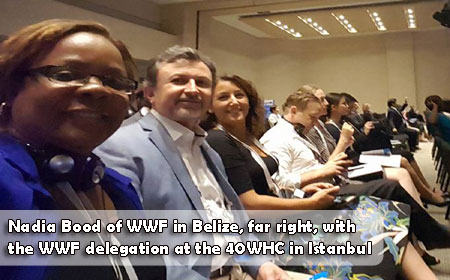 ISTANBUL, Turkey, Tues. July 12, 2016–The Belize Barrier Reef, inscribed as a UNESCO World Heritage Site in 1996 but put on the danger list in 2009 due to threats arising from the sale and lease of public lands for development leading to habitat destruction, will remain listed, following a decision announced by the UNESCO World Heritage Committee at its 40th Session being convened from July 10 to 20 in Istanbul, Turkey.

Last December, the Government of Belize announced a new policy for a partial ban against offshore drilling at the site, as well as within a buffer area spanning 1 kilometer from the site, but its promise to bring into force new legislation to buttress the ban has yet to be fulfilled.

Present in Istanbul was Nadia Bood, WWF-Belize Reef Scientist. Bood said in a WWF press release issued Tuesday that: “We are moving in the right direction with this decision, but it’s a long road to ensure that both the reef and the people who rely on it are protected into the future. WWF welcomes an expert monitoring mission by the end of this year to assess the government’s progress.”

She also cautioned that, “An oil spill anywhere within Belize’s waters would have a devastating effect on the reef and on the national economy. We need to prioritize the reef’s long-term value, rather than put at risk its sustainable development potential.”

Of note is that the Caye Caulker reserve, although listed among the banned sites, is not listed by UNESCO among the protected areas in the Belize World Heritage Sites.

Cabinet had announced a further ban within one kilometer of the Belizean Barrier Reef System, resulting in an additional 868 square miles falling under the offshore exploration ban. It had also clarified that areas that fall outside of the large acreages banned, would not automatically allow for seismic activities and exploration drilling without conducting the existing stringent environmental studies to determine critical habitats and sensitive zones.

Further to its commitments to the World Heritage Center, Belize was expected to meet two milestones by 31 January 2016: (1) finalize a map that defines the property’s surrounding areas where no oil exploration and exploitation can be permitted and (2) enshrine the policy for the partial ban in law for the permanent exclusion of the entire property and the defined surrounding areas from oil exploration and exploitation.

The WHC said in its recent announcement that while Belize’s announced ban at the seven sites is welcomed news, “…this decision still needs to be translated into a legally binding instrument.”

It also pointed to the need to reevaluate the extent of the 1-kilometer buffer zone.

In its State of Conservation Report of March 2016, the Government of Belize said that it expects that the Belize Barrier Reef Reserve System – World Heritage Site will be removed from the List of World Heritage in Danger in 2017. The Government also indicates that by the end of this year, it hopes to adopt laws to stop the sale and lease of state-owned land throughout the World Heritage Site, measured against the 2009 baseline.

The Government has indicated to the WHC that as of January 2016, there are no longer any petroleum concessions within or around the property. It added that all existing concessions overlapping or surrounding the property have expired and none were renewed.

According to the Government of Belize, up to the year 2000, a total of 50 exploration wells were drilled: 34 onshore and 16 offshore. Belize’s only commercial finds have been onshore at Spanish Lookout and Never Delay in the Cayo District.

In October 2007, the last year Island Oil reportedly drilled offshore, Princess Petroleum was given a petroleum exploration license over an area that included the Blue Hole; but that concession, originally for 200,000 acres onshore and 1.8 million acres offshore, expired in October 2015.

Back in 2012, the government announced that it would implement a temporary freeze on issuing offshore concessions after Taiwan relinquished a contract of over 1,800 square miles of offshore territory. Today, a full moratorium on offshore drilling remains in effect.

WWF calls for “a full ban on all offshore oil exploration and extraction to protect the reef and the livelihoods of 190,000 people – half the population of Belize – who depend on it.”

The Belize Coalition to Save Our Natural Heritage has also called for a complete ban. One of its member agencies, Oceana in Belize, has proposed draft legislation to the Government of Belize, captioned, “Clean Ocean and Safe Tourism Act, 2015,” which, among other things, calls for a comprehensive oil spill response plan, inclusive of adequate funds for implementation; an independently conducted cost-benefit analysis of offshore oil development to Belize to determine if overall benefits substantially outweigh costs; and a referendum to determine whether the moratorium should ever be lifted.