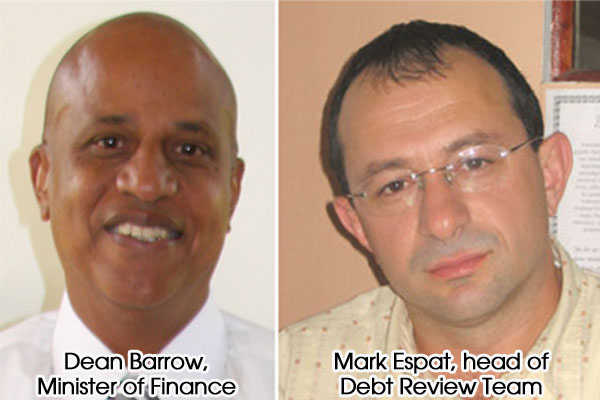 The restructuring of Belize’s US$544 million super-bond grew more contentious this week when bondholders balked at the terms proposed by Government of Belize—terms which they have said are not good for the negotiations; and the Government, inturn, responded saying that it will not make the impending bond payment due next Monday, August 20.

The Barrow administration had actually budgeted for the US$23 million payment in the national budget which took effect on August 1, 2012, but it issued a statement on Tuesday saying that it really can’t meet interest payments at the new rate of 8.5%, which takes effect next week.

The Government of Belize has signaled to bondholders that the BZ$46 million which bondholders have been expecting to get, despite ongoing negotiations, won’t be paid on the current terms, and it has insisted that the terms need to be renegotiated.

“We simply cannot afford this coupon payment given the financing shortfalls and other challenges we face. Our hope, however, is that we can move quickly toward a sensible restructuring of the instrument,” its press release said.

The announcement sparked a Standard and Poor’s downgrade on Belize’s long-term foreign currency ratings from “CCC” to “CC” (vulnerable to highly vulnerable), with a negative outlook suggesting that Belize’s next rating would be “SD” – “selective default.” The downgrade—about which the Barrow administration, which has borrowed primarily on concessionary terms, is unconcerned—would come even if the Government proceeds with restructuring under conditions of duress, the ratings agency has indicated.

“Under our criteria, either a missed payment or an exchange that we view as distressed constitutes a default,” said S&P credit analyst Kelli Bissett.

Amandala tried to interview Prime Minister and Minister of Finance Dean Barrow today about the latest developments, but he declined to speak with us, saying that he will host a press conference next Wednesday, August 22, and will take our questions then. For now, Amandala was told, the Government wishes to maintain its position as stated in this week’s press release.

In a statement released today, the Belize Chamber of Commerce and Industry (BCCI), the country’s premier private sector organization, expressed support for the proposed bond restructuring.

It said that, “…where the economic viability of our country is at stake, the terms of repayment should not be so onerous as to strangle or deter the country’s economic growth.”

The BCCI said that the goal should be to make the repayment of the BZ$1 billion in debt more manageable. It goes on, however, to urge the Barrow administration to “…use any fiscal relief achieved through a renegotiated bond to introduce programs to stimulate and promote economic growth and investment…. and take appropriate measures to trim its own expenditure so that it can introduce balanced budgets and avoid the recurrence of an unsustainable debt burden.”

In reacting to the impending default on the super-bond, the Opposition People’s United Party (PUP) pointed out that, “During the budget debate for 2012/13, the nation was led to believe that the government had budgeted for this payment and would be honoring the August 20, 2012 payment.”

The Opposition called on Prime Minister Barrow to address and inform the nation on the specific reasons for the decision, and the consequences and implications expected to follow.

The proposals made by the Barrow administration call for a principal reduction of up to 45% and interest rates ranging from 1% to 4% depending on the scenario chosen. The start date of the new bond would be 2012, which means that all the debt would be rolled over into a new transaction. 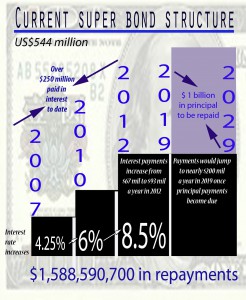 As our chart shows, the Government started to pay on the current super-bond in August 2007, when interest payments were 4.25% or $23 million semiannually. However, in August 2010, the rate increased to 6% and payments increased to $33.5 million semiannually. With the August 2012 increase in the interest rate to 8.5%, payments are due to increase to $46 million. In 2019, principal payments would additionally become due at a rate of just over $100 million a year for 10 years. The final date of payment would be 2029.

In a statement released Monday, the Coordinating Committee of Bondholders, which claims to represent holders of US$200 million worth of the bonds, said they were disappointed and concerned over the proposed terms.

A.J. Mediratta, a partner at Greylock Capital Management, LLC and co-chair of the Coordinating Committee said, “Bondholders have more questions than answers at this point… [We] do not consider the indicative scenarios released last week as the start of negotiations.”

Analysts have also reacted negatively to Belize’s proposition: “The proposal was worse than investors expected,” said Boris Segura, analyst with Nomura Securities, in an article published by The Wall Street Journal.

“If there is not an amicable restructuring, I think Belize is going to be shut out from international capital markets,” Mr. Segura added. “It’s something they need to analyze.”

Meanwhile, Citigroup analysts reportedly described Belize’s announcement as a “threat of a credit event rather than a willingness to negotiate…”

Amandala understands from official sources that to date, the Government of Belize has engaged bondholders only via conference calls. The official indicated that as long as the discussion is focused on Belize’s ability to pay its debt, a deal cannot be struck on terms very far away from what has been formally proposed.

As to the reaction of bondholders and financial analysts overseas, as well as the ratings agency, we were told that Government had expected as much. “We didn’t expect them to throw bouquets at us,” the representative said.

He said that the national budget included a very large deficit of $139 million, and Government has not yet been able to close that financing gap. Government made a very difficult decision when it came public this week to say that it can’t pay, the representative added, saying that the PM acted in good faith when he budgeted to make the super-bond payment this month. Notwithstanding the negative reaction to the proposed terms of restructuring, the Government remains hopeful that it will be able to strike a favorable deal with bondholders.

Belize’s debt profile has changed substantially since the Government nationalized Belize Telemedia Limited (BTL) and the Belize Electricity Limited (BEL). The acquisitions have meant that the Government of Belize has had to add hundreds of millions in debts on to its books to pay compensation for the compulsory acquisitions.

Of note is that the debt currently being restructured includes debt acquired under the Musa administration from the International Bank of Miami (IBOM) in the buyback of BTL, formerly Belize Telecommunications Limited, from Michael Ashcroft, in transactions that saw the company returned to Ashcroft until the recent nationalizations under the Barrow administration.

The US$544 million super-bond is made up of the previous Bear Stearns bonds totaling US$225 million, US$96 million from the Bear Stearns Sovereign Insurance transactions, and approximately US$225 million in debts from IBOM, Citicorp, the Royal Merchant Bank of Trinidad & Tobago (for debts to the Development Finance Corporation) and the Government of Venezuela.

The current super-bond structure could see Belize pay back over $500 million in interest over a span of 22 years, from 2007 to 2029, with over $1 billion in principal repayments due over the decade spanning 2019 to 2029.

The Barrow administration has always decried the super-bond as an onerous financial obligation straining the public purse, brought on by the last PUP administration.