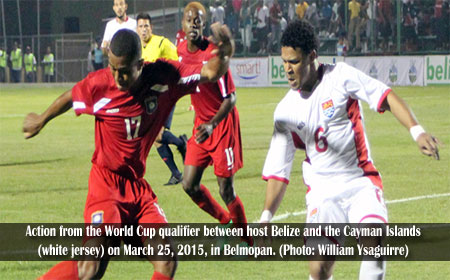 Concacaf.com
BELMOPAN, Belize, Thurs. Mar. 26, 2015–Belize and the Cayman Islands opened their CONCACAF qualifying first round series for the 2018 FIFA World Cup with a 0-0 draw on Wednesday night at FFB Field.

The result snapped Belize’s six-game losing streak, while the match was the Caymanians’ first full international since playing the Dominican Republic to a 1-1 stalemate in a qualifier for Brazil 2014 on November 14, 2011.

The best chance of the game fell to the host’s Harrison Roches, whose 66th minute goal was disallowed for offside.

The two-legged series will shift to the Caribbean on Sunday, when the sides meet again at the Truman Bodden Sports Complex in George Town.  The winner will advance to face the Dominican Republic in June.