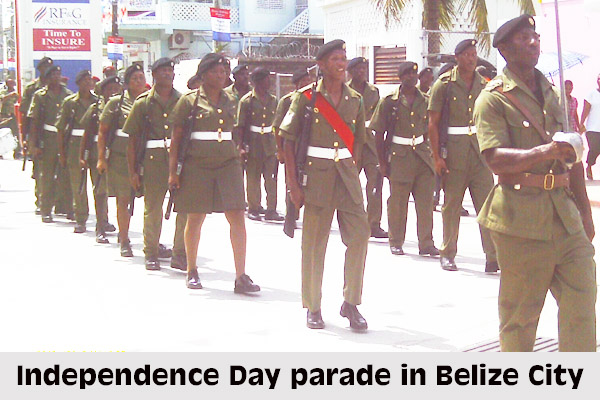 This past Saturday, September 21, marked the 32nd anniversary of Belize’s independence from Great Britain in 1981. The official Independence Day ceremony was held in the City of Belmopan on Saturday morning at the foot of the National Assembly Building. The ceremony began at 10:00 a.m., and included the traditional speeches given by Belize’s foremost parliamentarians and dignitaries, as spectators and invited guests looked on. As is usually the case, the leaders of the two major political parties gave two contrasting versions of the state of Belize’s economy. For the Prime Minister, these are very promising times; while for the Leader of the Opposition, it is a time of great despair.

In Leader of the Opposition Hon. Francis Fonseca’s speech, he stated, “As we celebrate, therefore, we recognize that serious challenges confront us as a nation. Government continues to be characterized by chronic combativeness; we need less confrontation and more dialogue, less arrogance and more humility, less personality politics, and more problem solving.

“The government’s response to the PAC proposal for reform in the public accounts, supported by the NTUCB and the Chamber of Commerce, regrettably takes us further away from these objectives; the will of the people can be delayed, but it shall not be denied. The politics of change and participation is here to stay. There is also need for focused and urgent action in job creation.

“Unemployment remains unacceptably high, particularly for women and youth. To get people back to work, we need to maximize the resources that our country has to offer to our people. We need to ensure sustainable economic growth and development. Less than 50% of our children are completing primary school, and for those who make it to sixth form or university, jobs are difficult to come by. Education must have a wider meaning, one which challenges us to provide adequate opportunities and participation in development for our people and our nation.”

On the other hand, Prime Minister Hon. Dean Barrow spoke of the accomplishments of his administration, and assured the nation that there are other developments scheduled to take place in the near future. In his positively charged dialogue, the PM said, “There is an economic splurge taking place in the country at this time that will lift the economy and give it wings. Work started a few weeks ago on the Lake Independence Boulevard that will link the George Price Highway from Fabers Road in Southside Belize City, to Chetumal Boulevard in Belama on North-side, Belize City. Government will construct a new bridge over the Belize River to make this possible at a total cost of around $25M.

“There is also a giant crane in the Belize City Center compound. That signals that the dismantling of the old Belize Civic Center has also commenced in preparation of the building of the new Belize City Center complex which is expected to cost $30M. It is going to be a state-of-the-art structure, of which the funding will be provided solely by GOB. Also, Mexico has committed to assisting to construct an Olympic-sized swimming pool at the Marion Jones Sporting Complex, which is currently under construction.”

Following the official ceremony, the formal uniform parades were held in Belize City and Belmopan and these had the participation of members of the Belize Defence Force, organizations such as the Scouts, Girl Guides and Brownies, the Belize Red Cross, all high schools, marching bands, and some churches. There were also floats representing some private sector organizations. After the parade, the all-day “Street Jump Up” was held in downtown Belize City on Albert and Regent Streets, featuring entertainment and performances by different live bands and sound systems as well as food stalls offering all varieties of Belizean food.