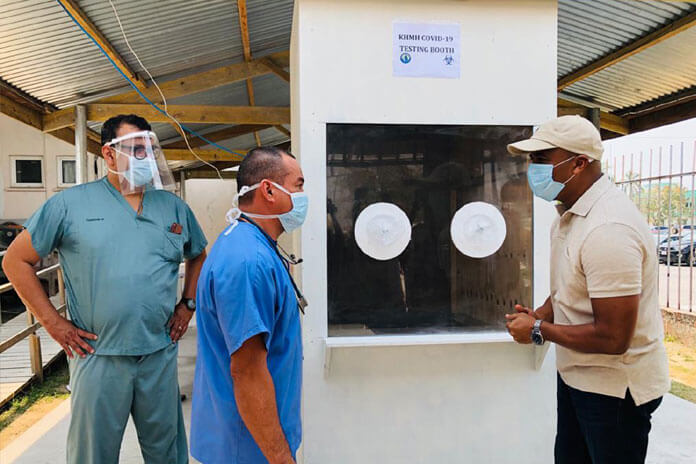 BELIZE CITY, Wed. Apr. 29, 2020– Mayor Bernard Wagner and the Belize City Council have been exploring multiple ways to contribute to the fight against COVID-19. On Friday he met with the media to discuss one of the council’s most recent projects to provide new coronavirus testing booths for some of the major hospitals and clinics in the country.

Through a partnership between the Council and multiple donors Mayor Wagner, via the efforts of Ivan Copo and Eric’s Welding Services from Belmopan, was able to produce four 50″ x 48″ testing booths. Two of the structures were issued to the Karl Heusner Memorial Hospital, while one was given to the Matron Roberts Clinic and another to the Cleopatra White Clinic.

During his interview, Mayor Wagner stressed the City Council’s desire to be a part of the effort to alleviate the hardships caused by COVID-19, especially since the loss of one of the council’s own employees, Mr. Hubert Pipersburgh:

“We felt that as a city we needed to contribute to help the whole effort in this COVID pandemic. We actually lost one of our workers and we felt compelled to help especially in the testing area. We believe that if things were much better then, what happened probably would have never occurred,” said Wagner.

The Council’s contribution amounted to $2,000 BZD per booth ($8,000 BZD total) and the booths were installed at the various health facilities on Friday, April 24.

Additionally, Mayor Wagner discussed the negative impacts that COVID-19 has had on the Belize City Council, especially with regards to revenue. Sometime last week the Prime Minister issued a letter to all mayors stating that government agencies would need to cut back on expenditures because assistance would not be forthcoming from the central government. The Mayor disclosed that luckily for the Belize City Council, they have been “making it with what we have” for the past two years and will continue along those lines.

Since the national shutdown, the revenue stream has decreased to 20% performance. According to Mayor Wagner, in the first week of April alone, the council’s revenue went from $150,000 to $2,000, and last week the council had only collected $150. Despite these drastic reductions, however, Mayor Wagner is still not considering laying off staff:

“We don’t want to add to the already unemployment marketing; so we are taking it day by day. When that time comes to really look at that situation we will have to look critically at it…I’m thankful that my staff has agreed to work along with us. We agreed before the lockdown that we would receive half pay while essential workers continue to get their full pay checks. We continue to work with all resources that we have to meet the demands of the city,”said Wagner.