BELIZE CITY, Tues. Jan. 11, 2022– It felt really great to be back and able to see football rolling again after 3 weeks pause for the Christmas break. Four (4) games were played on Saturday at the MCC Grounds in Week 5 of the Belize District Football Association (BDFA) 1st Division Amateur 2021-22 Opening Tournament.

In Game 1, the #1 ranked Caesar Ridge FC kept their winning streak alive, crushing Hattieville United Youth SC, 3-0. Jalen Babb scored 2 goals, a penalty at minute 14 and a shot in the 58’; while Carlos Lino scored the 3rd goal in the 72nd minute.

Game 3 was a very tight match between Kelly Street Bombers and Lake-I FC. That game ended in a 4-4 draw. Scoring for Kelly Street were Steven Baizar (22’), Francis Andrews (30’ & 59’) and Quince Briceño in the 73rd. Traveyon Martinez was the man of the match for this game, scoring a hat trick for his team, Lake-I FC, a goal in the 16’ and 2 penalties in the 70’ and 84’. Floyd Jones scored the other goal for Lake-I in the 40th minute. 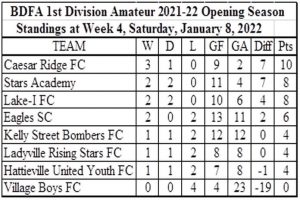 Upcoming Week 5 schedule at the MCC: