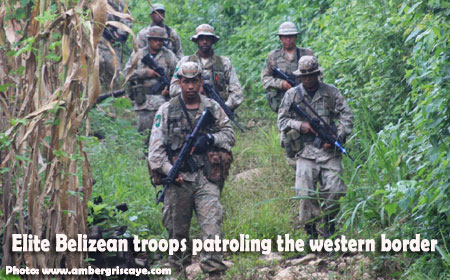 PRICE BARRACKS–On Friday, October 10, diplomats and senior military personnel from Belize and Guatemala convened at a high level meeting of the Belize-Guatemala Joint Commission in Guatemala City to discuss national security matters with their counterparts and committed themselves to several initiatives geared at preventing future conflicts near the border and decreasing illegal cross-border activities. Included among these is an agreement to engage in an unprecedented effort to conduct joint patrols at the sometimes deadly Belize-Guatemala border, an area where Guatemalans illegally enter Belize’s pristine forests and plunder its irreplaceable assets – its exotic flora and fauna, and its millennia-old trees in our archaeological and national preserves.

Guatemala soldiers are expected to tell their citizens to quit their illegal activities, because Belize law will be enforced against them

Brigadier General David Jones, BDF Commander, was present at that meeting, and on Friday, October 17, at a press conference at the BDF headquarters at Price Barracks in Ladyville, he told the audience about one of the agreed points, which involved a promise by authorities from the Guatemalan Armed Forces to assist their Belizean counterparts by doing everything they could to prohibit their citizens from illegally entering Belize and carrying out illegal activities on Belizean soil.

He said, “What was agreed is that both countries would improve on existing patrols and include joint coordinated military patrols. The patrols that we do currently with the Guatemalans are what are called link-up patrols. We go to designated points along the border from north to south. We meet there for about 15-20 minutes, exchange information and then we go our separate ways. What is being proposed now is that apart from that, the BDF and the Guatemalan Armed Forces will spend probably a day, two days, or even three days patrolling together as a unit and going into some of these same villages inside Guatemala and probably talking to these people so that they have an impression that there are two different forces and they will have their own officials informing them of where the border is, and that they should respect it.

“I think this will go a long way because the [Guatemalan] people appear to be indoctrinated that this country belongs to them and on many occasions, they are aware that Belizean law is enforced on the eastern side, but they still pretend that they don’t know where the border is when the soldiers would meet them, even though sometimes they do have a good idea.”

Jones also expounded on another agreement that in many ways was a direct response to the death of promising young Belizean Special Constable, Danny Conorquie, 20, who was shot to death by what are believed to be Guatemalans while safeguarding tourists at the Caracol Archaeological Reserve a month ago on September 25.

As part of a 12-point agreement signed at the end of Friday’s meeting, law enforcement on both sides of the border have established a mechanism which allows for greater cooperation and intelligence sharing on crimes which take place in and around the border.

“There will also be establishment of intelligence-sharing mechanisms among the various security organizations, particularly between military to military, police to police, our Special Branch and theirs will share information. If this was in place, it would have helped a great deal in the shooting death of the police officer at Caracol because they could have called their counterparts immediately and they would have been able to take action over there and wait for the shooter to go over [to Guatemala], because we know that there was a track heading towards La Rejoya from Valentin, and if they had communication, they could have been able to intercept him.

“So, we are going to try to put mechanisms in place to share intelligence and information with each other so that as an incident occurs in Belize, and we believe the perpetrator is a Guatemalan, we call their authorities and try to get their assistance to stop them or try to capture them on the other side”, Jones mentioned.

Since the Belize-Guatemalan Joint Commission convened, Jones revealed that the two sides are currently sharing their respective intelligence on the murder of Danny Conorquie in an effort to track down his killer, since they already have an idea of who the suspect is and which village he came from.

One of the contentious border points has been Monte De Los Olivos, a Guatemalan border community whose residents – illegal farmers in particular – have become well-known to Friends for Conservation and Development (FCD) rangers and the BDF for their consistent incursions into the Chiquibul National Park.

As a result, the Guatemalan government had put in place a project in that community which is designed to thwart incursions into the reserve forests on the Belize side, and since the project reportedly led to the decrease of such activities in the reserve, Jones informed us that their Guatemalan counterparts will expand it to other border villages as well.

“There is one village called Monte De Los Olivos – this is where we’ve had the problematic people that have been coming in to the Chiquibul, and this is the same area where the last fellow was shot and killed because of exchange of gunfire with the BDF. The Guatemalans have implemented a project in that village so that the people can self-sustain themselves and they are being educated that they are not supposed to come over on the Belizean side because Belizean laws will be enforced. That has been very successful.

“The women in that village are being given a stipend – they are given money to send their kids to school and to sustain their family,” Jones detailed.

“So, 90% of the problems we had in Monte De Los Olivos have been solved,” he went on to note, explaining, “There are still a few people coming across, but in that area of the Chiquibul, we have had very good success. Now that success in Monte De Los Olivos, we want to take those down to the other Guatemalan communities. The next one in particular that we would like to see that happen is in area of La Rejoya, which is just opposite the Valentin camp. That area in the Caracol Archaeological Reserve is where we deem now is the biggest threat to our security forces and to the extraction of our products”, Jones noted.

Jones also told us that there were other commitments which were made that, in his opinion, will finally allow for Guatemala to actively join the effort to stop its citizens from crossing the Belizean border.

“We will conduct joint visits to neighboring communities in Belize and Guatemala to convey the commitment of both parties to improve the quality of life, community safety and to strengthen the friendly relations between neighboring towns, as well as to protect the environment. The agreement also identifies mechanisms for direct contact among the various agencies and military forces in order to establish direct, free-flowing and ongoing communications to coordinate preventative measures as well as rapid and effective responses in situations as necessary,” Jones said.

He further stated, “Personally for me, what I wanted them to do was to agree to try and do more [because] I did not believe that Guatemala has been doing all they should or could to stop the encroachment inside Belize. They will [now] work closer with our military and our security forces, and we will work jointly together to try and stop their civilians from coming across.

“So, it doesn’t matter how much resources we have, how much manpower we have, it won’t be very successful unless Guatemala plays a part. They are our neighbor, and if they can stop or dissuade their people from coming into Belize, it will help us a great deal. We will still put the necessary resources to stop whatever encroachment – illegal or criminal activity that comes over to Belize, but Guatemala has to play a part.”

“If they implement what they have pledged – what we will see in the Chiquibul and the Caracol Archaeological Reserve would be a significant reduction of encroachment and illegal activities occurring inside Belize. This will also minimize the eventuality of armed exchange of gunfire between the security forces and Guatemalans, and reduce the tension and the criminal violence and encounters”, he noted.

Jones believes that once the pledges are fruitful, it will hopefully signal the start of joint humanitarian operations in both countries.

“Finally, what the militaries and the other security agents will do is work on strategies to preserve the environment along the AZ [Adjacency Zone] and to work jointly if there are any humanitarian efforts that need to occur in either country. So, the BDF and the Guatemalan Armed forces will be working together on protocols to move forward to stop these encroachments that are happening inside Belize. The Guatemalan people on their side are being informed that as long as they cross into Belizean soil, Belizean laws will be enforced”, he cited.

According to Jones, Guatemala has also committed to dedicating resources to some of the villages along the border, since the encroachments and plunder of natural resources are stimulated by the needs of indigent peasants who reside in the various border communities along the border.