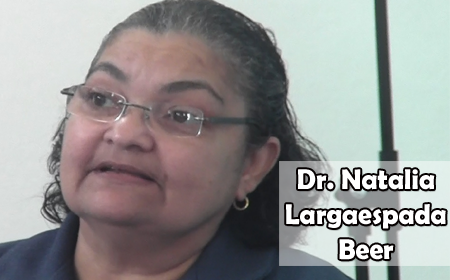 BELIZE CITY, Fri. July 21, 2017–Health authorities say that cervical cancer is the second most common form of cancer in women in developing countries such as Belize, and if it is not detected and treated early enough, it can prove fatal. Routinely, the Pap smear has been the test employed in screening women for precancerous and cancerous cells. However, Belize is now rolling out an alternative screening method which, for most patients, would allow them to get instant results and on-the-spot treatment if their results are positive.

Researchers say that the screening procedure called VIA — Visual Inspection with Acetic Acid (or vinegar) — is a practical alternative to the Pap smear which is cost effective. When the acetic acid is introduced to the cervical area, lesions on the cervix will become visible as white patches. Depending on the extent of the lesions, instant cryotherapy treatment, which includes freezing and thawing of the affected area, can be done immediately. However, persons with more than 75% of the cervix having lesions as well as persons whose cervixes appear cancerous are referred for more specialized treatment.

Director of Health Services (DHS), Dr. Marvin Manzanero, told Amandala that the launch took place in Belize on May 31 of this year. He confirmed that currently, the services are being offered at the Cleopatra White Health Center and Matron Roberts Health Center in Belize City, where we first learned of the program. The initial phase will allow the Ministry of Health to assess the efficiency and cost of the program, the DHS explained.

According to Dr. Natalia Largaespada Beer, maternal and child health technical advisor in the Ministry of Health, services are also being offered at the Punta Gorda Hospital, the Western Regional Hospital in Belmopan and the Northern Regional Hospital in Orange Walk. The intent is to expand coverage to elsewhere in the country. She informed us that additional training sessions are planned for coming months (a second training session before the end of the year and a third next year) which would enable other medical officers around the country to carry out the VIA at their locations.

Beer said that cervical cancer accounts for roughly 25% of cancer cases in Belize. The VIA, she said, is being promoted to boost early detection. Receiving the results of the routine Pap smear could take anywhere from a few days to 2 weeks in the public health care system, but the VIA cuts out the waiting period. A patient with a negative result could complete the encounter in as little as 15 minutes; those who require cryotherapy (a procedure also used for prostate cancer) would have a longer encounter.
Beer said that the VIA can be done by any trained medical officer — a trained nurse, general practitioner or specialist. Patients are informed of the nature of the procedure so that they can know what to expect. According to Beer, the procedure is offered to women ages 25-49. It is offered at no cost to patients.

Patients whose results are negative are asked to do a follow-up test in 3 years; those who get positive results and are treated with cryotherapy are asked to return in a year for a follow-up. Cases that require more complicated interventions are dealt with on a case-by-case basis, such as those requiring a specialist (obstetrician/gynecologist) to conduct a procedure called the LEEP — loop electrosurgical procedure, which Beer said is a bit more complicated.

As for women ages 50 years and over, the pap smear is still recommended, since changes in a woman’s anatomy at that stage of life do not normally permit effective visual inspection, Beer explained. Women younger than 25 who have concerns that they might be at risk can also be screened, but they would be offered the routine Pap smear.

The technical consultant explained that cervical cancer is caused by the Human Papilloma Virus (HPV), which was found to exist in 8% of women screened in Belize back in 2008. According to Beer, of the 453 women screened for the 20 HPV serotypes, 8% were positive, mostly for serotypes 16 and 18, although 18 serotypes were found among them. This is significant, since, according to Beer, serotypes 16 and 18 are known to cause 70% of the cervical cancer cases worldwide.

Beer told us that so far, the treatment rate for the VIA is “very good.” She said that the evidence has shown that once women whose results are positive are treated, the cure rate is very high.