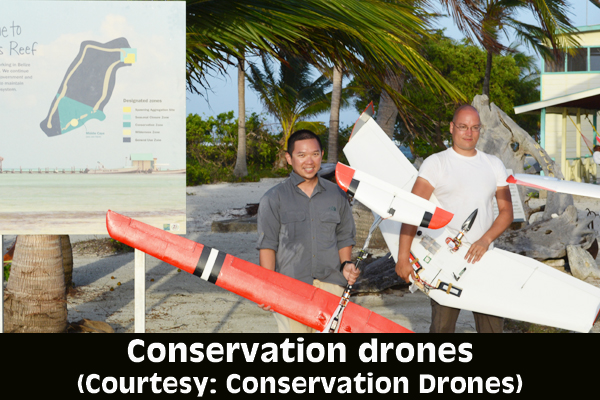 Fisheries Administrator Beverly Wade told our newspaper in an interview on Wednesday that she anticipates that the new fisheries legislation, which has been in the works for years, would be taken to Parliament some time during the first quarter of 2014.

Wade said that after a successful pilot project in 2013, the department is also moving to introduce conservation drones, which should improve the efficiency of fisheries surveillance in central and southern Belize.

She said the four drones will be deployed in the coming months. Funding support is coming from the Wildlife Conservation Society, with support from Conservation Drones, the organization which is building customized drones to meet Belize’s enforcement needs.

Enforcement is one of the department’s toughest challenges, and Wade also indicated today that they have been working with fishers across the country to promote self-compliance or voluntary compliance.

She said that the Fisheries Department does not have the human resources to properly police the sector, but with the implementation of managed access fisheries—a program which Wade said would be rolled out over the next two years—they have seen statistical outcomes showing reduced infractions by fishers, and a positive change in the attitude of fishers, since they now feel a greater sense of responsibility while using the resources.

However, last week, a group of fishers from Stann Creek sent a petition to Fisheries Minister Lisel Alamilla, complaining that they run the risk of being marginalized because of access restrictions to what they regard as traditional fishing grounds.

“The idea of fisheries management is not to disenfranchise the fishers…” Wade told us in response.

She told us that she saw the petition earlier this week, and the ministry is organizing a meeting for the parties to clarify what are the points of concern.

“When we were implementing managed access in the Glovers Reef Marine Reserve, we grandfathered access into that reserve to all the fishermen who have a history of fishing in there,” she said.

The National Garifuna Council is also concerned about the preservation of traditional fishing rights. We asked Wade how the department plans to preserve those rights—which could be claimed by fishers from Sarteneja in the north or Punta Gorda in the south—even as they plan to roll out a program to end open-access by commercial fishers to marine fisheries.

“We have looked at traditional fishing from a very broad perspective and what we have basically done is grandfathered in all those people who have been fishing in these areas. We have literally not excluded people. Since the program started about three years now, what has happened naturally is that you’ve had people falling out of the program… whether voluntarily or because of non-compliance with regulations—but we never excluded anybody!”

The Fisheries Administrator said that the objective is to guarantee fishers that they can continue to benefit and that they will not be marginalized – which, she said, is what often happens in a lot of small-scale fisheries.

Wade spoke to the media on the sidelines of the launch of the 2014 Eco-Audit, in which several of the department’s initiatives helped to prop up Belize’s overall score – the best of the four countries assessed. The country scored 3.5 for ecosystem-based fisheries management, surpassing Mexico, Honduras and Guatemala.

During the Q&A segment of the launch, concern was raised over illegal fishing by Guatemalans in southern Belize. Wade said that she is aware that Guatemalans are fishing illegally in Belize, and she was heartened this week when they were informed of a plan to implement bilateral programs with Guatemala. Wade said that a lot of the areas highlighted by the department were areas listed for improved collaboration with Guatemalan authorities – initiatives that she said can only truly be done through “some good bilateral cooperation.”