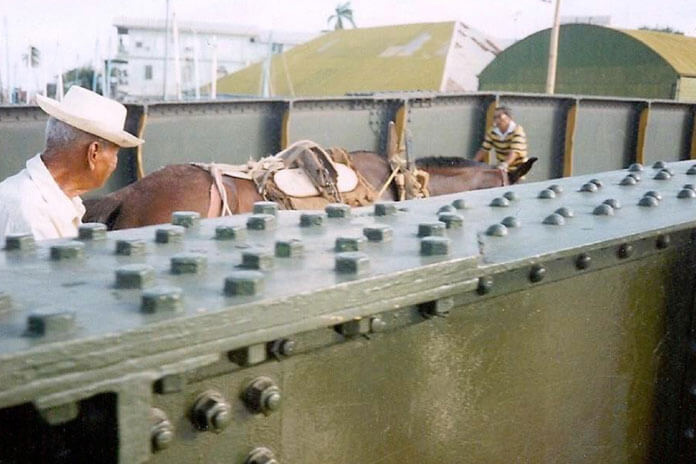 Flying machines and Time magazines, no good, no good, for the Third World man! (“Third World”)

The click-clack sound of the mule’s hooves fills the fresh early morning air on the sunny city streets of Belize City during the hustle and bustle of the 1960s and 70s Belizean daily life. From Monday to Saturday of the week, the Belizean mules and carts driven by hard working Belizean men like the legendary “Brown Man”, Mr. Ramsey, and others, hold their lanes in the crowded Albert Street traffic, delivering goods and services to the merchants of Belize City, the nation’s commercial center and once its capital before the coming of Hurricane Hattie.

It’s so very moving to reflect on Belize City’s humble beginnings in a nation that valued the hard work and innovation of a time gone by, since it was an era of such passionate creativity by the Belizean citizenry. For those like “Brown Man” who played their part honorably and carried on their duties as breadwinners and laborers of a country struggling out of colonialism towards self-government and heading towards independence, we salute their drive and dedication to building Belize.

Before another mule and cart driver, Mr. Ramsey passed on, he reminded me here in Los Angeles, California where he lived during the last years of his life, how much the Belize mule and cart transport unit contributed to Belize’s transport system. He gave me an entire volume of information in terms of its historical beginnings starting from down south of Belize where the shipping and transport boats like Heron H, Africola, and others brought in goods from the Central American republics deep into the Belizean country terrain of rural town and villages for distribution to the shops and businesses of the Belizean merchants.

An intricate and elaborate flow of merchandise that passed through the country’s feeder roads, river ways, seaside, highways and byways that were far more underdeveloped than they are now. When these goods reached the major Belizean areas, places like Belize City and towns of the six major districts, they were then distributed and transported by the Belizean style mule and carts to their final destination.

This mode of transportation was unique and typical of the Belizean brand because they used one of the most ingenious aspects of mobile engineering — the wheel and beast of burden that those like “Brown Man” and Mr. Ramsey designed from mule, wood, and automobile parts, produced a remarkable design that should have still been used today, instead of motorized transport in a new Belize has become so expensive, polluting the once pristine air quality and threatening Belize City’s health and wellness with more vehicles than people.

Mr. Ramsey had mentioned that to maintain the cart had taken a special kind of quality grooming of the mule in feeding it with the best grass and fodder to preserve its strength and wellbeing. Then came the daily maintenance of the wheels of the cart that required mechanical skills as though its driver was servicing an automobile. Being such a small man, Mr. Ramsey, who spoke for all his colleagues like Brown Man and others who drove the innovative animal and machine, explained the proud history of the Belizean transport that had revolutionized the Belizean work ethic in so many ways.

The memory of the Belizean mule and cart that came and went away so fast as though it never really existed, begs the question as to why the other Belizeans like the Mennonites in the western district of Belize still employ this classic Belizean transport in transporting most of the country’s poultry, eggs, and its milk. Though it pops up again in Belize’s tourist industry transporting tourists, it appears that Belize’s Third World man may have substituted technology and automobiles for what once provided a safer and healthier quality of life like the Belizean mule and cart.

Inquiring minds would also like to know if Belizean productivity has improved ever since? Let’s place the Belizean mule and cart in its rightful place in Belize’s historical museum.

(Photo through the courtesy of Patrick Barrow & BELIZE MUSIC WORLD)