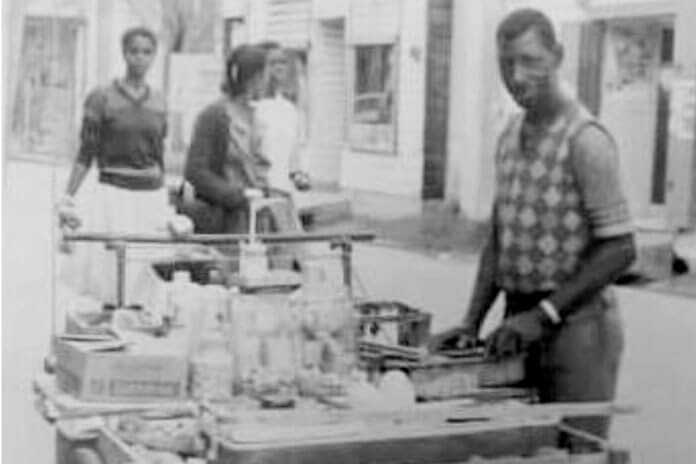 My own father, like Oscar Lamb here, was one of the many Belizean vendors and independent business people around Belize City, Belize who were one of the few Belizean black men in the 1960s and 70s that were self-employed.

Just watching how neat and well-dressed Mr. Lamb was on this classic and historic photo here, erupts the nostalgic juices of pride and spirit that had embodied these constructive Belizean men that appeared to have not been affected by false pride and ambition.
Today in Belize, the absence of these kinds of Belizean black men who created their own employment out of their meager resources is noticeable.

The hearts of many Belizeans ache from the memory of the bygone days where these men were intricate parts of Belizean society that today have been replaced by struggling Central Americans who have migrated to the shores of Belize in search of a better life. It is the hard working immigrants from the Central American republics that are doing most of the vending businesses in Belize today. And the common site of Belizean black women selling food day and night across Belize City, has become another stark reality check that traditional roles that were once done by Belizean black men, have now become non-traditional ways of how these mostly Belizean black women are making a living for their families.

Our Central American brothers and sisters know how difficult the societies they were once lived in, which had driven them across the borders of Belize to make an honest living to support their families in Belize and those they left behind back home. Belizeans should not despise them for this but embrace them in providing a service that was once done by their own Belizean ancestors like “Lamb”.

The images of my own father pushing a bicycle cart loaded with food and cold drinks for the Belizean afternoon meal that would feed hundreds of hard-working Belizean laborers across Belize City has been one of the most proud memories that have lived within me ever since he has passed away. And the early morning rise of my mother and her daughters who wiped the sleep from their eyes as they loyally worked on the kerosene stove to prepare the food in the kitchen that dad would be selling to make a living for all of us to be maintained and be educated. How honorable was this kind of family business of shared responsibility and loving unity in the building of prosperous financial family values!

Before that, when my family lived at Bradley’s Dockyard in the 1960s before Belcan Bridge came to connect the south and the north side of Belize City, my mother and her girls were cooking the food for the family business on what Belizeans called a fire hearth. This was difficult work then because the smoke from the firewood would burn their eyes and made it uncomfortable in the early morning air. But they persevered and did not let my father down in the least because they knew that he was the one that had to push that cart proudly across Belize City in the hot sun and they wanted his daily sales to be prosperous. They dread the times when he would come home from work quite frustrated that business wasn’t good and wondering if their cooking was poorly done. But it wasn’t that. It was just the struggle of a vendor like him in the burning afternoon sun of the city.

We all had jobs to do. Being just boys then, myself and my younger brother also had to rise early in the morning to help our older brother to bring the water from the street faucets and fill two large drums. It was not easy work, but we did our part and then also had to get ready for school afterwards.

Water being a precious commodity in Belize City in those days, served many purposes for a vending business like that because it was used in the preparation of the drinks my father made to be sold with the lunches. It was bottled in his own creative bottling apparatus and assembly line that he innovated. It was a pleasure to watch in the yard as the bottles of drinks slid down a makeshift wooden line while my brother snapped on metallic bottle covers on them with perfect precision. Standing there watching in excitement, if any of the bottles broke in the process, it was my job to pick up the broken pieces and discard them in a large plastic drum.

So seeing this memorable photo of the legendary Belizean businessman, Oscar Lamb aka “Lamb”, as most Belizeans called him and his vending business in the day, this remarkable story was easy to be told through the eyes of my own father who came from the same cut of Belizean cultured men who refused to allow the pressures of Belizean society to turn them into criminals. They became innovators of the best kind in Belizean society that if Belize could have invested in them then, they could have produced one of the most productive manufacturing sectors for Belizean trade, as well as producing food for Belize’s growing and young population that were coming of age.

This is in memory of the legendary Oscar Lamb.

(Photo through the courtesy of Belizean archives)