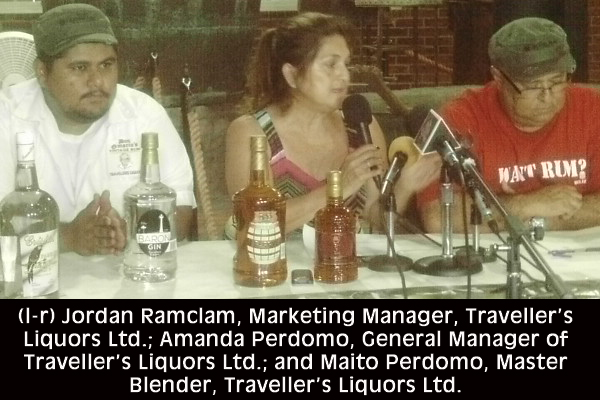 Distilled products manufactured by Traveller’s Liquors Ltd. have been on the shelves of Belizean merchants for over 60 years, and today the company exhibited superiority in the world of spirits yet again as another one of their products – this time Traveller’s Classic White Rum – was rated, for its flavor, at the top of the list of white rums from around the world.

The FiftyBest.com – raters of the globe’s finest wines and spirits – recently hosted a White Rum Tasting competition in New York, where 20 contenders were evaluated for the distinguished “Best White Rum” awards for 2014, and Traveller’s Classic White Rum of Belize emerged as the victor.

The product was awarded a gold medal, and today the proprietors of Traveller’s Liquors invited the media to the Heritage Museum at Mile 2 on the Philip Goldson Highway where they delightedly made the announcement.

General Manager of Traveller’s Liquors Ltd., Amanda Perdomo, said, “In 2013, we won 2 awards in London; the 5 Barrel [aged rum] won gold in the Masters Spirits competition, and the 1 Barrel won silver. This year, we submitted the Traveller’s Classic White rum to TheFiftyBest.com for a tasting competition, and out of 20 rums, we got a gold award, so we’re very proud of this rum.”

According to marketing manager Jordan Ramclam, customers are getting “top quality for their dollar” whenever they buy Traveller’s products because they are the only liquor company in Belize with an outstanding number of international accolades.

He boasted, “We have high standards locally and internationally, and we are popular not only in Belize, but worldwide.”

Maito Perdomo, master blender at Traveller’s Liquors, informed that the now award-winning Traveller’s Classic White Rum was the first alcoholic beverage that was ever blended by the company when it first got into the business in 1953.

“The award gives us a rating of where we are. Our rums have become world-class and when you participate in these awards tournaments, sometimes you don’t place anywhere, but when you start getting awards, it’s because the taste is out there and [now] they are recognizing us, so we feel glad”, he remarked.

The company believes that their innovativeness sets them apart from other liquor producers in Belize, and according to Ramclam, their longstanding customer relationships and environmentally-friendly practices also differentiate them from other rum companies.

A release from TheFiftyBest.com reported that a pre-qualified panel of judges blind-tasted the white rums using professional criteria and rated them individually on a 1-5 point scoring system, with 5 being the best, and after tallying the scores, medals were awarded based on the judges’ impressions.