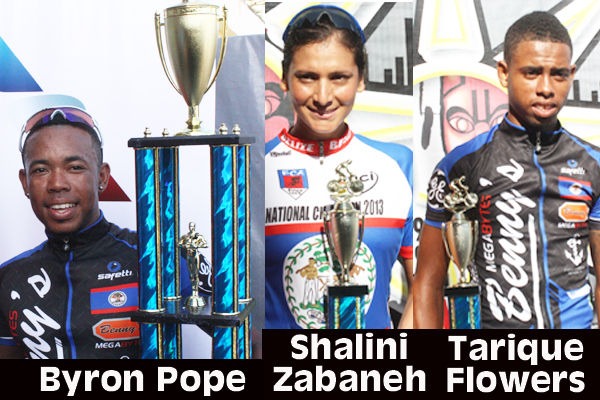 New Year’s Day 2014 began with more heavy rains and overcast skies, as the 24th running of the Krem New Year’s Day Cycling Classic got under way from the northern border for the Elite and U-23 riders, and from Orange Walk Town for the Female, Junior/Youth and Masters Cat 4/5 races, all heading for the finish line near the intersection of Central American Boulevard with Mahogany Street in Belize City. But by the time the cylists neared Ladyville, the sun was shining brightly and it remained clear skies and bright sunshine till the end of the race, and in fact for the rest of New Year’s Day.

With a lucrative package of station prizes and finishing prizes, there were enough foreigners in the field of Elites – Americans, Mexicans and Guatemalans, for some local fans to be wary of all the “treasures” possibly leaving for foreign shores. But the era of team riding is now firmly entrenched in the cycling community, and the “spoils” are reportedly shared to some extent among team members. Nevertheless, race fans still instinctively root for our local boys, especially in the Krem Classic and the Cross Country, the two biggest races on the cycling calendar; it certainly adds to the spice of the race. And they were not disappointed yesterday.

65 of an original list of 73 cyclists started the Elite race at 9:00 a.m. from the northern border for the 97-mile ride to Belize City, and they included 7 Mexicans, 2 Guatemalans and 2 Americans. One of the Americans was Rainel Sanchez, reportedly a champion in Florida, who rode with the Bel-Cal cycling team, a team of Belizean born cyclists residing in California.

Aside from the many station prizes along the way, much attention was focused on the four $1,000.00 cash prizes, the first coming at San Roman in the Corozal District, and that was taken by young Joel Adan Borland of the Telemedia team out of Belize City. He was one of an early breakaway group of 7 riders that opened a small lead that eventually increased to a minute and twenty-two seconds at 2 miles outside of Orange Walk Town. That group included Joel Borland (Telemedia), Darnell Barrow (Smart), Deezan Spence (Western Spirit), Ruben Cano (Benny’s Megabytes), Mexican Jose Gonzalez (Benny’s Meg.), Nissan Arana (riding for Depredadores of Mexico) and Giovanni Lovell (Telemedia). The gap was closed considerably by the time they entered Orange Walk Town, where Deezan Spence (Western Spirit) took the second $1,000.00 cash prize at the Shell One Stop Station; but by the time they hit Mile 43, the chase peloton had caught up with the leaders.

By the time they reached Mile 25, the picture had changed somewhat, and it was a group of 5 – Byron Pope (Benny’s Meg.), Mexican Carlos Lopez (Benny’s Meg.), Giovanni Lovell (Telemedia), Herman “Hijo” Requena (Smart) and unattached Mexican Juan Manuel Yapur with a 2 minutes and 30 seconds lead over the chase peloton.

There has been some discussion, and a bit of confusion about the developments nearing the climax of the race, as the cyclists made the last turn out of the Philip Goldson Highway at the Belcan roundabout and crossed the bridge for the home stretch. By that time, Byron Pope had already seized the two big station prizes of $1,000.00 each at the Maskall junction and the Kubuli corner in Ladyville. All city fans knew was that, as the cyclists came into view down the Boulevard stretch, it was Byron in front, and 3 others chasing. It’s been a long time coming for Byron Pope, after many close finishes in both the Krem Classic and the Cross Country, and he raised both hands in relief and exultation as he triumphantly sailed across the finish line to the cheers of happy and satisfied fans who had come to witness the New Year’s spectacle. Young Giovanni Lovell tried bravely, but could not overtake Byron’s Mexican teammate Carlos Lopez, who claimed 2nd place.

The 6 female cyclists who participated in this year’s Krem New Year’s Classic gave very good account of themselves, notably actually breaking away from the Juniors about an hour into the 50-mile race, which left Orange Walk Town at 9:30 a.m. And it looked quite interesting in the early going, with Kerah Eiley sharing the early station prizes with Alicia Thompson and Gabrielle Lovell. Kerah made a break for it on her own around Mile 20, but the Juniors were also chasing, and they aided the other females to catch up with her by Mile 16. And then, approaching Los Lagos, with the two Junior male riders pacing hard, Shalini made her move, breaking with them while the other females could not hold on. And that was the race. Shalini took all the station prizes from Los Lagos to the finish, coming in alone for her 5th Krem Classic championship. Veteran Marinette Flowers completed the journey, but did not figure in the prizes this time.

14 Juniors took part in this year’s Krem Classic, riding along with the Females and Masters 4/5 on the 50-mile journey from Orange Walk to Belize City. Station prizes were shared in the early going, as Devin Azueta (Cayo High Road) and Delon Gentle (BECOL) took the prizes up to Maskall junction; but after that the race was between Zahir Figueroa and Tarique Flowers, last year’s Junior champion, who had suffered an early puncture but managed to get back in the race. Zahir took the station prizes from Burrell Boom cutoff to the airport cutoff; but thereafter all station prizes belonged to Tarique, who powered his way ahead of Zahir to the finish line for his second consecutive Krem Classic victory.

The big team winner in this year’s Krem Classic was the Benny’s Megabytes team, which captured the top 2 places in the Elite race, as well as 1st and 3rd places in the Juniors.