The victim, 38, was in the US and returned to San Pedro last Thursday 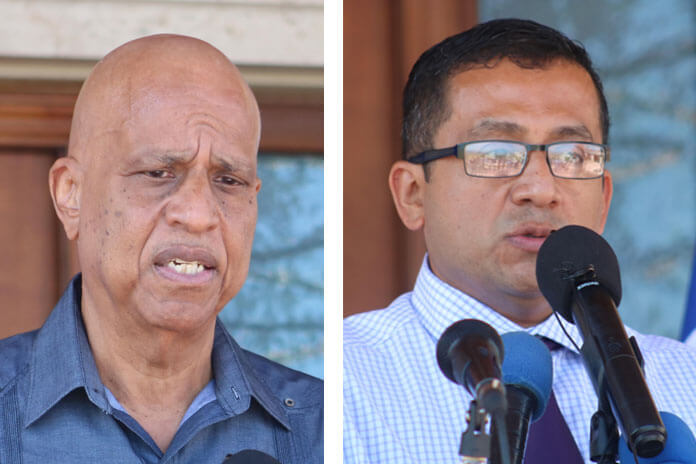 BELIZE CITY, Mon. Mar. 23, 2020– Today, the Government of Belize announced at an early morning press briefing the first confirmed case of COVID-19 in the country.

Director of Health Services, Dr. Marvin Manzanero, explained that the person is a Belizean who travels frequently between Belize and the Los Angeles area.

The 38-year-old woman is a resident of San Pedro and returned to the country on a flight last Thursday.

Dr. Manzanero stressed that the infected person began experiencing symptoms of the coronavirus, but had not been sneezing.

Dr. Manzanero said that the infected woman had been in self-isolation.

“We have identified the case; she doesn’t need hospitalization,” Dr. Manzanero said, adding, “her family members will be screened, and mapping will be done to find out who she may have been in contact with before she got to San Pedro.”

Dr. Manzanero said that it is his understanding that the woman went into immediate self-isolation upon her arrival, and “that may limit the amount of people we actually have to go and trace.”

Dr. Manzanero went on to say that they would not be able to give any further details because this has become an investigation. “I hope people will be respectful of public health, because we really need to map this well for everybody,” he went on to add.

Prime Minister Dean Barrow, who said that the unfortunate task of making the announcement fell on his shoulders, said that the woman had begun feeling unwell before she arrived in Belize and repeated that she immediately went into self-isolation upon her arrival.

Barrow explained that the woman had had very limited contact since her arrival in Belize, and that the physician who attended to her was properly protected.

“We are hopeful that the incident of transmission is minimal”, Barrow said, “but we can’t be absolutely sure; that is why the mapping and tracing exercise is very important.”

Barrow explained that those who have not taken the measures that were put in place really have to start taking such measures seriously. The PM stressed that the social distance measures need to be adhered to.

“The principal message I want to send out this morning is that we must take this thing very seriously. But we mustn’t overreact, and we mustn’t panic,” Barrow said.

The Prime Minister pleaded with San Pedranos not to come to the mainland, and pleaded with mainlanders not to go to San Pedro unless it is absolutely necessary.

“We will give some thought as to whether or not we need to impose quarantine; if we do after consultation with the medical personnel, it will only be for something like 48 hours. That is the kind of time frame that they need to do as comprehensive a mapping as possible,” Barrow explained.

The National Oversight Committee on the coronavirus will be meeting this morning, and Barrow said, “Bars, clubs and casinos, I don’t see how they could remain open, and grocery stores and supermarkets, there will have to be monitoring on the part of the owners of these properties, to ensure that if there is a line outside, there is distance between the persons forming that line.”

“We are prepared as much as we can… but there is help arriving for our medical frontline personnel. We have already chartered a couple of planes out of Guatemala. We wanted to use Tropic Air, but they don’t have a big enough carrier,” he said, adding that “We are getting 61 or 62 medical personnel out of Cuba, and we had to source a flight out of Guatemala City via our Embassy … there will be two planes; the larger is the one that will be going to Havana on Wednesday or Thursday.”

Barrow said that the Cuban medical personnel will be housed at the Belize Biltmore Plaza Hotel.