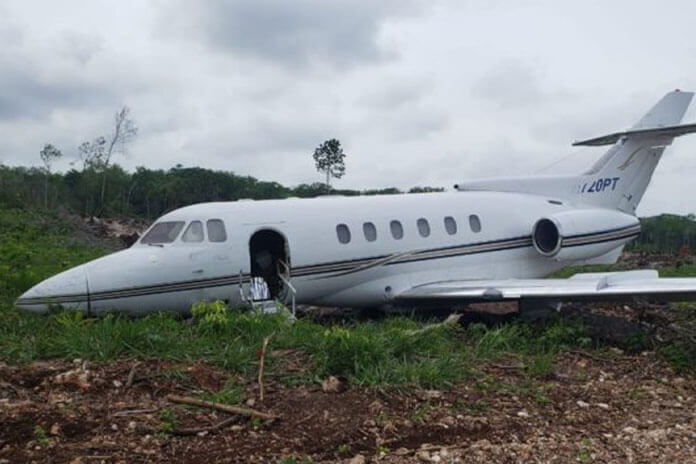 SARTENEJA, Corozal District, Fri. May 29, 2020– Yesterday morning at about 6:00, a suspected drug plane was found abandoned near a feeder road on a farm in Sarteneja.

When police arrived, the engine of the plane was still running, but it was damaged due to the crash-landing. Police said that the plane’s wheels were damaged, and its front axle and its right wing were broken. Checks were made inside the aircraft, but nothing was found.

The plane’s crew and its cargo were believed to still be in the area, but Belize’s law enforcement officers were not successful in finding anything during their search.

Commissioner of Police Chester Williams said that the plane’s crew could not have escaped with the cargo by sea because the Coast Guard, which is vigilant in the area, would have caught them, so he believes that they escaped by land, and police have been combing the area in an effort to find them.

So far, however, the effort to find the crew and the cargo has been in vain.

Commissioner Williams said that their investigation has led to two men who police believe were involved in landing the plane. They are being interviewed in an effort by police to possibly get useful information that could lead to the recovery of the cargo. The two men were not arrested in the area, but an investigation led to them, said Commissioner Williams
He said that the plane was being tracked from Venezuela to Belize, and police were deployed to areas where a plane would likely land, but the Police Commissioner believes that the presence of police in the likely areas forced the pilot to land on the farm, which was not a suitable area.

This plane was found after a similar plane was found destroyed in the Othón P. Blanco area in Chetumal, Mexico, on Wednesday, but that plane had been partially destroyed and burnt. No cargo was found in it. The Mexican authorities carried out similar searches, but the cargo has not been found.