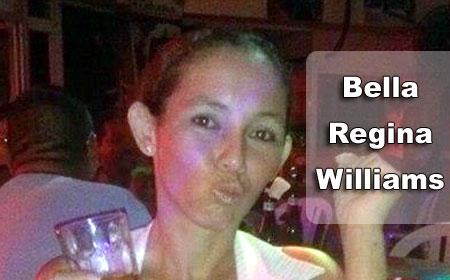 BELMOPAN, Cayo District, Mon. July 25, 2016–Hours before she was murdered, Bella Regina Williams, 34, may have danced with her suspected killer at the La Cabana Restaurant and Discotheque in Belmopan, Senior Superintendent Howell Gillett told Amandala today.

Neighbors told police that around 3:25 a.m. on Monday, a commotion and screams were heard coming from Williams’ yard at #2 Zultana Street in Las Flores, in Belmopan.

According to Williams’ sister-in-law, about four hours later, Williams’ 12-year-old daughter discovered the body of her mother lying face down, and apparently dead.

Williams, who was stabbed multiple times during the attack, was found soaked in blood at the entrance to her home.

Her body was taken to the Western Regional Hospital, where medical officials confirmed that she was dead.

Belmopan police have since detained one man and are currently seeking Josue Israel Ortiz, 19, whom they consider a person of interest in the investigation of Williams’ murder.

Williams had been in a relationship with her husband, police officer Felton Williams, for almost fourteen years and had three children, ages 12, 9 and 8.

Though she and her husband have been separated, her sister-in-law today told Amandala that it never seemed that way because Regina was always around for birthdays, Christmas celebrations and other family functions.

The sister-in-law told us that their families are struggling to put the pieces together, as Regina was a loving mother and person.

Today, her children, including her 12-year-old daughter who discovered her and washed away her blood, have started their first day of grief counseling.

Facebook
Twitter
Pinterest
WhatsApp
Print
Previous articleShot in the back while making panades
Next articleIn the Mek Mi Rich case, BTL to pay cost of court of almost $59,000