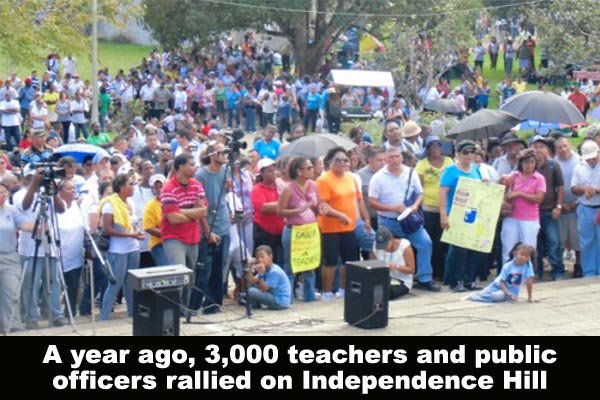 The Belize National Teachers’ Union (BNTU) held a Council of Management meeting this weekend, and while our newspaper had been unable to get official word from national president Luke Palacio on the outcome of that meeting, due to a family emergency, Amandala has been reliably informed that the BNTU members and executive officers intend to gather at Independence Hill when the budget is read this Friday.

The BNTU has said that “when [the] budget is read, we will be going to Belmopan…” However, at the time of this report, we were unable to get an estimate of how many members from the various branches they expect to be present at the budget reading.

As we reported to you in our last mid-week edition, Friday, March 7 is slated for the reading of the 2014-2015 budget, and teachers and public officers are looking forward to an announcement that included in that budget is the 5% salary adjustment which they have been asking for, to help offset cost of living pressures.

The BNTU had announced some weeks ago that it would embark on a sustained campaign not just to agitate for the salary adjustments but also to bring national issues to the fore – among them the Penner Passport Scandal.

We understand that the BNTU plans on supporting the initiative by Citizens Organized for Liberty through Action (COLA) for a private prosecution of former Minister of State for Immigration Elvin Penner, who continues to sit in Parliament as the representative for Cayo North East, following a failed attempt to oust him via petition.

While the BNTU is not pleased with how the Penner matter has been handled, the BNTU notes the promising announcement by the Government that they will get the 5% salary adjustment they have been asking for, to take effect in 2014. However, they are still waiting to get that commitment in writing.

Prime Minister and Minister of Finance Dean Barrow confirmed to the media last week that an additional $22 million is included in the budget for teachers and public officers, and this, he said, would meet the demand for the 5% salary adjustment, although Barrow signaled that the Government may have a challenge sustaining the increase in the long-term.

Amandala is reliably informed that the unions are still planning to meet with Financial Secretary Joe Waight next Wednesday, March 12, to further discuss the salary adjustments.

The union is also moving ahead with plans for a wristband and dollar drive for members and supporters of its causes.