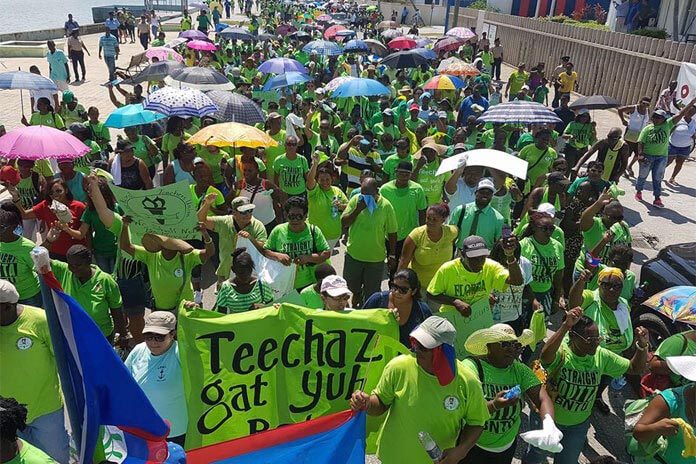 BELIZE CITY, Mon. Jan. 6, 2020– The members of BNTU have begun the New Year asserting their readiness for action in light of the new Education Rule amendments being levied by the Ministry of Education. BNTU’s national president, Elena Smith, had addressed the matter in her end-of-year address, and during a number of media rounds that took place last week in which the stipulations of said amendments were addressed.

According to Smith the Ministry is seeking to amend rule 132 (4), (5) and (6), which addresses the teachers’ Christmas, Easter and summer vacations. Despite not receiving an official document which outlines the stipulations of the amendments, the BNTU president reported that the rule change will give the Chief Education Officer authority to set the duration of the aforementioned vacations to ensure that a 180-contract-day school year is achieved by teachers.

President Smith weighed in on the union’s view of the matter in an interview with Love FM Belize on Friday, January 3rd, stating:

“We expected that the amendment would have been to the Christmas vacation periods; however, the Ministry has decided that they would be amending the entire rule on vacation which includes our Easter and summer vacation; and there would be one rule that said that the Chief has the discretion to determine the school calendar and the vacation periods. So that is of utmost concern to us because we have one person who will be dealing with our entire vacation period for the school year determining when and how that will happen and we feel like there can be mischief in that.”

In response, the BNTU had requested that its members express their readiness to act on this matter by wearing their green “Teechaz Ga Yu Bak” t-shirts to school on Monday, January 6, instead of their regular uniforms. These shirts have been worn by union members during all their previous acts of protests and those who are not in possession of one were asked to wear any shirt which is green in color to show their solidarity with the union.

This act, according to Smith, is geared at sending a message that the union is on the alert to see the official amendment and what the wording of the said amendment will entail, given that the union was only made aware of the intentions of the rule change, but has not seen any document regarding the matter thus far.

In addition to rule 132, other rules regarding the contract periods and emergency vacancy of teachers will also be amended, the former of which will provide educators with indefinite contracts of employment, which according to Smith is in favor of the teachers.