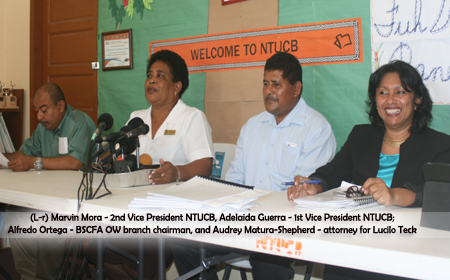 BELIZE CITY–Tensions stemming from a long-standing disagreement between the Belize Sugar Cane Farmers Association (BSCFA) and the Belize Sugar Industries (BSI)/American Sugar Refineries (ASR) continue to linger since a majority of the cane farmers have hesitantly yielded to what some have referred to as a “one-sided” deal that was brokered between the two major stakeholders in the interest of a time-sensitive crop season that has been delayed by six weeks, but mainly due to the fact that 99% of those cañeros are immersed in overwhelming financial obligations which have negatively impacted their bargaining position.

As it presently stands, two cane farmers associations which broke away from the BSCFA and are now scheduled to also be registered as legitimate business partners with the factory owners, reportedly signed their own commercial agreements with BSI/ASR earlier today.

While that process plays out, however, a war of words has ensued between local activist elements, including BSCFA executives, on one hand, and pro-government officials and other government supporters labeled as “conspirators” who, allegations are, have pushed the vulnerable cañeros into a corner as it relates to accepting the proposed commercial purchasing agreement which had been on the table.

During a Government of Belize (GOB) press conference announcing GOB’s intent to endorse other parties to forge business relationships with the multinational sugar company in the absence of a signed agreement between the BSCFA and BSI/ASR exactly a week ago, on Thursday, January 8, those agitators were referred to as “radicals” by Prime Minister Dean Barrow, as he accused them of “manipulating the situation for their own benefit.”

Today, however, the so-called radicals, which consist mainly of members of the BSCFA, the umbrella trade union, the National Trade Union Congress of Belize (NTUCB) and the activist organization known as the Rod of Correction (ROC), came out swinging and lashed out at their opponents at a midday press conference at the NTUCB’s Belize City office.

BSCFA Orange Walk branch chairman, Alfredo Ortega, maintained that the cañeros were put in a compromising situation by GOB’s actions, but emphasized that although the embattled BSCFA may be down, it is certainly not out.

He said, “Farmers were called to a meeting with their directors over the weekend, and there were rumors that the association is breaking up – that is not true. We have not seen any paper from any group of [executive] members resigning from the BSCFA.”

According to Ortega, 16 of the 18 branches pledged to remain with the BSCFA, and one branch had to clarify their position because their plan was to remove themselves from the BSCFA, but they did not bring any documents to demonstrate their intentions.

He said that the BSCFA is still strong, and acknowledged that all farmers want the crop to start, primarily because of their financial commitments, and not because they are happy with the new proposed agreement.

The vocal BSCFA executive later described BSI/ASR’s “strong armed” ultimatum which suggested that if the farmers do not sign the agreement, the crop won’t start, as “bullsh*t.”

Concluding with a daunting quote from legendary Mexican revolutionist, Emiliano Zapata, he said, “If there is no justice for the people, then there will be no rest for the Government!”

Attorney Audrey Matura-Shepherd then censured certain government attorneys for “intentional misinformation that is being given out” in regards to the constitutionality of the Sugar Industry Act, for which a court case had been initiated in 2010, and she maintained that even though a consent order was handed down for the Act to be amended, it was not pursued, and therefore, what the PM said at his press conference last week was an “outright lie”.

“When the Prime Minister said that the [Sugar Industry] Act was unconstitutional, that was an outright lie; there is no other way to characterize it, and it is clear that there is no court order that declares any portion of the Act or the BSCFA as being unconstitutional”, she asserted.

Matura-Shepherd maintained that if the Act was indeed unconstitutional, the attorneys for the BSCFA, BSI and the SICB would have argued to that effect, but she alleged that it was instead intended to dissuade the farmers, most of whom lack adequate understanding of the legal implications.

“It’s embarrassing for me as a junior attorney to have to be correcting my senior attorneys on basic principles of law and procedure…If we had brought a wrong case, the judge would have thrown out the case”, she indicated.

She added that GOB and BSI/ASR have teamed up against the cañeros as a method of deliberately “frustrating the process” so that the court does not force the Sugar Industry Control Board (SICB) to comply with the law.

While she cited that the case has not been withdrawn, it must be noted that once the grinding season starts, then there will be no need to proceed with the Writ of Mandamus to have the SICB use its authority to declare the delayed crop season open.

Speaking on behalf of the NTUCB – which had also caught the ire of GOB, but has remained steadfast in the corner of the cañeros – was 2nd Vice President, Marvin Mora, who made it clear that they (the union) are not able to speak much about cane farming, or even the cañeros, but what they are able to comment on is the negotiations that had been taking place amongst the cane producers and the millers.

He elaborated on basic negotiation principles which, he stressed, were not honored in the new proposed commercial purchasing agreement, and therefore pointed out that the NTUCB had to get involved since the farmers, who also fall under the NTUCB umbrella, are not getting a fair deal in the process.

“We cannot stand and watch a multinational corporation ‘bully-reg’ the hard working farmers”, Mora affirmed, as he called on the cañeros to unite in the best interest of themselves and their families.

While the saga does not show any signs of going away anytime soon, the pressing conditions related to the welfare of not only the farmers, but the survival of the entire sugar industry, have forced the cañeros to sign the new agreement that will tie them down for at least the next three years.