The agreement remains in place until July 2022, or the end of the sugar crop 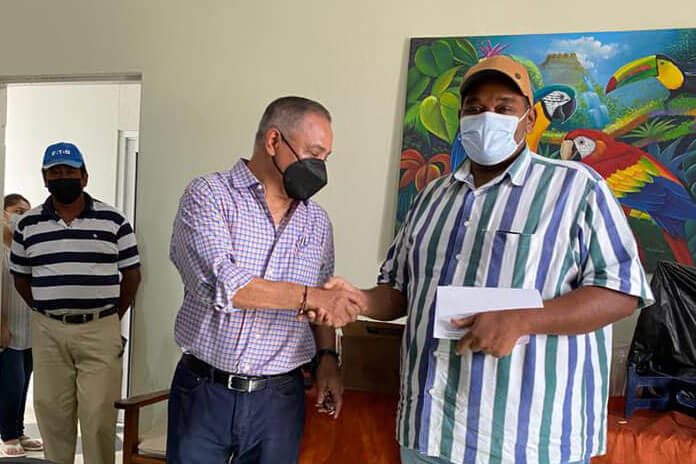 BELIZE CITY, Mon. Jan. 3, 2022– The delivery and milling of sugarcane will finally start following the signing of an interim agreement between the Belize Sugar Cane Farmers Association (BSCFA) and Belize Sugar Industries (ASR/BSI). This agreement, which ends July 31, 2022, will hold the sugar industry intact until a new commercial agreement is formulated and signed by the parties. Chairman of the BSCFA, Andrew Westby told the media that the the April 30 expiry date of the agreement, which had been proposed by the Prime Minister, Hon. John Briceño, had been extended to the date proposed by the association, but reports are that ASR/BSI feel that they were strong-armed into signing the agreement, given the growing unrest outside their gates for over the past week.

On Friday evening, cane farmers began moving their trucks packed with cane from the delivery operations gate. Those cañeros had been using their trucks to block the entrance to the company’s compound for several days. On Thursday they marched to the Prime Minister’s house in Orange Walk and called for his resignation.

For now, the new year starts with a sigh of relief, for both the association and the mill. But three other cane farmers associations have suffered losses due to this impasse in negotiations, although they were not a part of that ongoing process and subsequent standoff between ASR/BSI and BFSCA. The government has reportedly opted to take on the legal liability in connection with any claims taken to the court by those cane farmers or ASR/BSI in connection with losses suffered due to the delay in the start of the season.

Joining the Prime Minister in the efforts to broker a truce between the parties were other northern area representatives, Florencio Marin, Ramon Cervantes, Ramiro Ramirez, and Agriculture Minister Hon. Jose Mai. The BSCFA chairman told local media that their involvement fast-tracked the process. As previously reported, ASR/BSI has been reluctant to sign an interim agreement that would only prolong an already stretched-out issue. They were in opposition to the August 1, 2022 end date of the interim agreement proposed by the BSCFA, but seemingly backed down from that hardline stance on Friday, which set the stage for the signing of this agreement.

The company publicly expressed its view, however, that the BSCFA’a actions held not only the mill hostage but also the farmers who are members of the association, as well as farmers from the three other associations. The mill has described BSCFA’s blockade as “illegal and damaging.”

The company, in a release issued on December 30, stated, “BSI does not condone the illegal tactics and threats of violence to pressure concessions from the mill. There is no place for such a tactic in a modern sugar industry. This will only damage the credibility of the whole industry, and call in question whether under such a volatile atmosphere it will be safe to operate the mill.”

The release added, “BSI reiterates however that it is disposed to engage constructively in this process provided both sides show good faith.”

The cane farmers’ trucks were not moved from the delivery entrance of the BSI compound until the new agreement was signed. In a post on Facebook following the successful signing of the interim agreement, Prime Minister Briceño stated, “Today, Belize Sugar Industry and the cane farmers of Belize delivered an agreement. This is a win for both sides, the overall sector, and the national economy. With the crop season now set to start both sides will proceed timely to realizing a full agreement amenable to all sides.” Despite this, cane farmers protesting on Friday made much more extensive demands. Some cane farmers are asking for a three-year agreement to be signed with the mill.

“We must elect a minister that is not John Briceño. Secondly, we must now go to the Prime Minister’s house. We will go peacefully because, if not today, then the cane farmers will have nothing tomorrow or Monday. Thirdly, with the permission of our leaders and you all, we are sending a message to the Prime Minister – that we want three more years at BSI without any more delays. We want this in black and white by Monday and if you do not bring the paper to us then you can leave once again.” Those were the words, spoken in Spanish, of a cane farmer as he stood before a group of approximately 50 persons who marched to the Prime Minister’s house. They had received approval from the Commissioner of Police, Chester Williams, to engage in that procession to Hon. Briceño’s home. 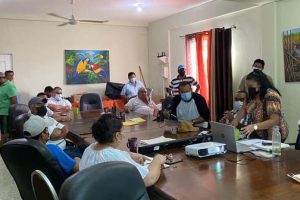 Commissioner Williams explained to the media that they have been approaching their policing of this recent sugar protest a bit differently. He cited past gatherings which became more volatile and led to worse outcomes due to police involvement and said that they are exercising their authority responsibly and are trying to strike a balance.

“I must say thanks to the cane farmers and the association for working so good with us,” Williams told local media.