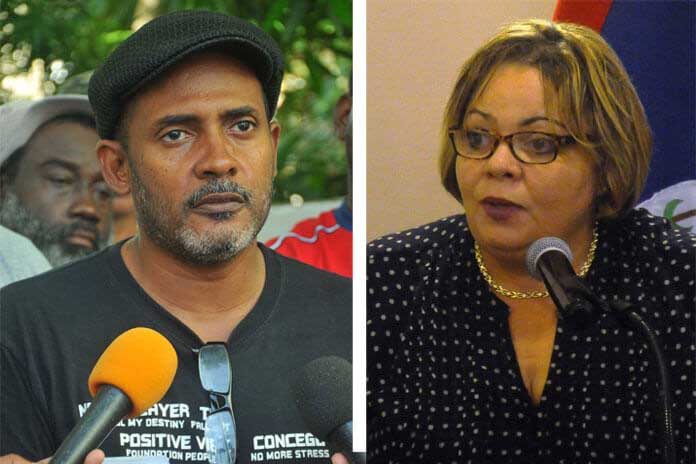 BELIZE CITY, Tues. Feb. 4, 2020– Last September, Amandala broke the story that ASR/BSI was conducting “experimental runs” on the highways, using trucks to transport sugar to the port at Big Creek, in the Stann Creek District, and in that manner, was bypassing the Port of Belize Limited, in Belize City, which uses stevedores to load sugar barges for transportation of sugar to the overseas markets.

Those “experimental runs” have been having hard-hitting effects on the earnings of approximately 150 Belize City-based stevedores, represented by the Christian Workers Union, (CWU) which has been engaged in protracted negotiations with the receivership of the Port of Belize Limited (PBL) for better working conditions for its members.

Yesterday, Monday, at the behest of the CWU, Minister Tracy Taegar- Panton met with the union’s president, Evan “Mose” Hyde, to hear the concerns of the stevedores, whose earnings have been severely affected by the apparent decision of the sugar companies to ship overland, instead of through the PBL.

The stevedores said that since August of last year they have not been loading sugar on the barges, but they stated, “we know that the sugar di run by truck.”

“We have been trying to get answers. We want to know what happen to our jobs. What di happen to the men dem who no di work, weh owe banks? Today, we come fu answers. We met with the Prime Minister, we no get no answer; we met with Tracy Taegar, we no get no answer and today, we come out ya fu get answers,” the very vocal stevedore, Raymond Rivers, declared. “We want the nation fu si how dem di chance we stevedores,” Rivers said.
Rivers added, “Nobody no come talk to we. Port, no come talk to we, no body no talk to we. If we never call wan meeting with the government today, nobody no mi wan come.”

CWU president Evan “Mose” Hyde explained that the stevedores are very concerned about two aspects of the present situation in the sugar industry. The sugar industry has been hit hard by drought, and then there were rumors about ASR/BSI moving its transshipment point from the Port of Belize in Belize City, which would be a significant blow that would cause a withdrawal of an income source for stevedores.

Hyde said that about 2 million dollars is earned at the Port of Belize through the loading of sugar, “and this is not chump change”. “They have been asking the union to find out what is the situation with sugar. And so, we have been doing that,” he said.

“Add to that now the difficulty of sugar, where you have a delayed commencement and uncertainty if it is going to come through the Port of Belize, when it begins. We are talking here money; in a nutshell, it’s livelihood, jobs, the ability to pay your bills,” Hyde said.

Hyde expressed gratitude for Minister Panton, who came out to speak to them about the issue.

Hyde said the failure of ASR/BSI to communicate with them has added to the frustration and the feeling that they are “being disrespected.”

“In fact, as a union we feel like we are being disrespected, because we are responsibly engaging you, asking you what the situation is, and we have not been able to provide the answers to our members, because we have not been given them,” Hyde said, “Respect to the Minister for coming.”

Following the meeting, Hon. Tracy Taegar-Panton said that she is not able to speak for ASR and the Port of Belize, but was able to share with the stevedores some of the things that government has done to be able to have a sustainable sugar industry.

The Minister of Trade and Investment spoke of the success Belize has had with COTED and the economic agreement that was signed between Belize and Taiwan which has a quota for sugar from Belize.

“Those things are part of the long-term plan, but they are bread and butter issues,” she said.

“So I will go back to Cabinet and share those issues with the other ministries who are involved with the conversation. The Ministry of Agriculture, the Ministry of Labor and the Ministry of Finance can have a more comprehensive understanding of the concerns that the stevedores related to me today,” Minister Panton said.

Minister Panton said that the matter first came to her attention last November when stevedores expressed concerns about shipments of sugar that were being sent to Big Creek, rather than to the port in Belize City.

“That was the first I heard about the situation with the stevedores,” she said.

Minister Panton said that the Minister of Agriculture, Hon. Godwin Hulse, should have been at the meeting, but there was a breakdown in communication, between him and the Secretary General. Minister Hulse will meet with the stevedores to share what he has learned from ASR/BSI, Minister Panton said.