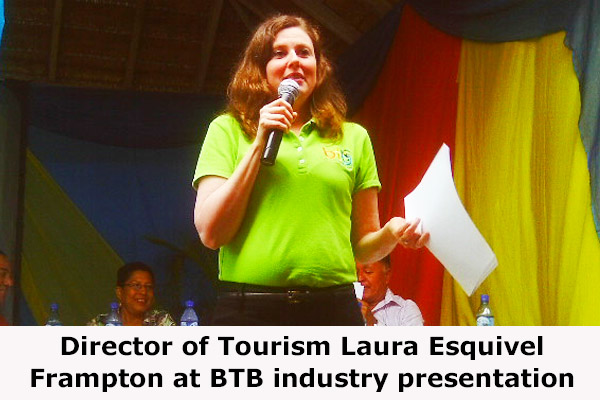 In an effort to highlight the triumphs and challenges of Belize’s tourism industry in 2013, the Belize Tourism Board (BTB), as well as other relevant stakeholders, convened at the Tony’s Inn Beach Resort in Corozal Town today, where they not only looked back at the previous year, but they also looked forward to the oncoming year in tourism.

After a cultural presentation by a group of traditionally dressed Mestizo dancers, the Chairman of the BTB Board of Directors, Einer Gomez, reflected on the role of tourism in Belize and the advantages that it has brought to the country.

Thereafter, Minister of Tourism and Culture, Hon. Manual Heredia, Jr., remarked on the 2013 tourism season, and described it as another “groundbreaking” year for tourism in Belize. He cited unprecedented records of tourist arrivals in 2013, amounting to 7% growth compared to 2012.

In addition, the Minister informed the gathering of a 5.7% rebound of cruise tourist arrivals which was categorized as an “above average” trend for the industry.

Heredia declared that as the relevant minister, he will make sure that tourism remains a national priority, and that the 1,400-plus licensed tour guides have more opportunities for sustained employment this year.

BTB then conducted a 15-minute video presentation which outlined the activities the board carried out to promote growth and development of the tourism sector over the past year, as well as charted the works which are in progress to further improve the industry. All the plans are in line with the Tourism Master Plan, which was formulated a few years ago. That particular plan identifies some constraints to tourism development, including poor level of accessibility by land and air.

Director of Tourism, Mrs. Laura Esquivel Frampton, then elaborated on the various projects that were implemented over the past year and their benefits, as well as proposed contracts and initiatives that will come on stream this year.

She emphasized that 65% of BTB’s annual budget is spent on marketing, specifically the marketing of tourism products.