By the time police arrived on the scene, any cargo or passengers that might have been on the plane were already gone. 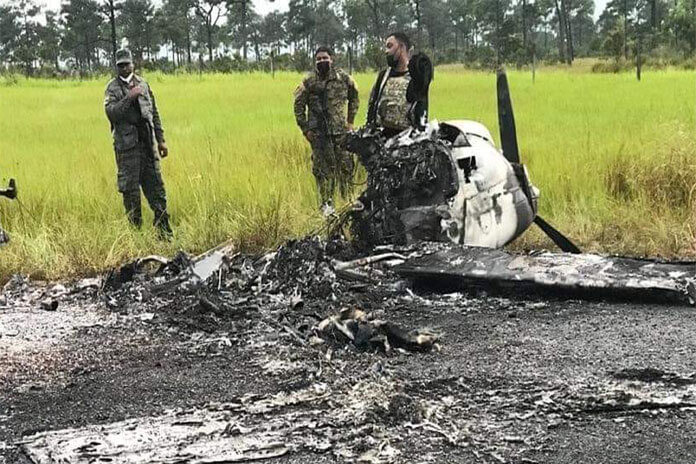 BELIZE CITY, Thurs. Nov. 25, 2021 — In the wee hours of this morning, police responded to reports that an aircraft was seen flying in our southern air space, near the area of Kanantik, and the department deployed officers to the Kanantik Airstrip, a private aerodrome servicing Silver Creek Airport in the Stann Creek District. There, the officers found a single-engine aircraft burning — already reduced to charred remains when they arrived on the scene. This type of clandestine landing and subsequent burning strongly suggests that the aircraft was used to carry out a narco operation; however, police found no signs of any cargo that might have been on the plane, nor did they come across any persons who might have been involved in the operation.

This most recent landing near Kanantik occurred 21 days after a major drug bust that took place near Bladen Village in Toledo following a narco plane landing that was seemingly facilitated by police officers who belonged to the Police Department’s Command Operations Strike Team. (Those officers were granted bail earlier this week.) Unlike that bust, however, the criminals involved in this recent operation got away seemingly effortlessly.

Typically, our authorities would be warned of such an imminent landing by neighboring air-surveillance authorities, but this particular aircraft seems to have gone under the radar, landing undetected and off-loading whatever cargo it was carrying before being completely burned.

Police conducted a search in the immediate area after finding the burnt plane, but found nothing illegal, according to a police report issued today.

It must be noted that a drug plane of this size could easily carry hundreds of kilos of cocaine.

What is of note is that during a bail hearing for the police officers who were accused of being involved in the previous drug plane landing in Bladen, Toledo, the prosecution, to support its objection to the granting of bail to the officers, had stated in its arguments before the court that it appeared that persons working for the drug cartels had infiltrated the Police Department, and that there was a well-coordinated rogue operation within the force. The attorney representing the four cops, Richard “Dickie” Bradley, had seemingly been stunned by the assertions, which he said were frightening and were to be taken seriously, since the statement was made by the Police Department’s head prosecutor, someone who works inside the Police Commissioner’s office.

Those assertions have returned to the public consciousness in the wake of this most recent drug plane landing.