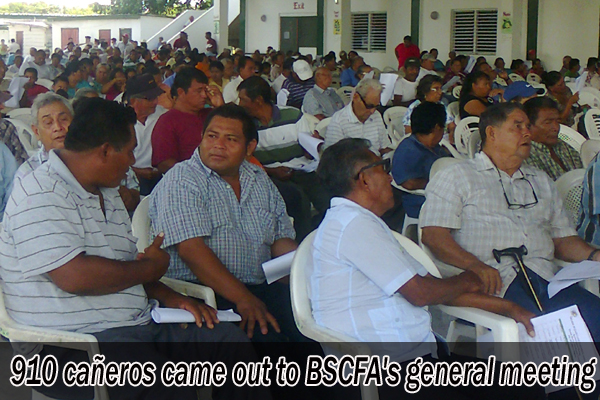 The farmers do not believe the sugar company, BSI, is acting in good faith

In a unified show of defiance today, local cañeros gave an outright “thumbs down” to a proposal which was made by factory owners, Belize Sugar Industries (BSI)/American Sugar refineries (ASR), at a general meeting staged by the Belize Sugar Cane Farmers Association (BSCFA) at the Escuela Secundaria Tecnica Mexico in San Roman Village, on the outskirts of Orange Walk.

The sugarcane farmers are outraged by BSI’s offer to pay them 51 cents per ton of bagasse, especially since they (the cane farmers association) retained the expertise of technical professionals who have informed them that in reality, the farmers should be able to get up to $4 per ton of bagasse, a valued byproduct of sugar cane, which is currently sold by BSI to power producers BELCOGEN, who, in turn, sell it to the Belize Electricity Limited (BEL) after it goes through its process of production.

Prior to the meeting, BSI/ASR had given the farmers an ultimatum – requiring that the BSCFA and their members make a decision by the beginning of next month, August, to either accept the 51-cent bid, or receive nothing at all. After the meeting, when we spoke to the vice chairman of the BSCFA’s Committee of Management, Alfredo Ortega, he made it clear that based on the farmers’ response, BSI’s offer is simply unacceptable.

He said, “The farmers didn’t accept the 51 cents [proposal]; instead, they have passed a motion for SICB [The Sugar Industry Control Board] to intervene in the situation, and for them to look for other experts that will find a solution to the situation at this point.”

Ortega told the media that the farmers have agreed that the BSCFA should continue with the bagasse negotiations up to October 15 of this year so that the matter can be resolved before the start of the next sugar cane crop season later this year.

In their capacity as a stakeholder in the sugar industry, the SICB is being asked to intercede and seek ways to bring forth a resolution to the ongoing deadlock between BSI/ASR and the cane farmers.

The farmers’ initial proposal of $10 per ton of bagasse was struck down by BSI/ASR, who maintained that the association is being unreasonable, since such a payment would suck up almost 97% of the gross revenue that they (BSI/ASR) receive from selling bagasse to BELCOGEN.

The company had promised to pay cañeros a retroactive sum for the 2013/2014 crop if they are willing to accept the 51-cent offer by August 1, but according to Ortega, the farmers aren’t interested because they simply don’t think that they will be compensated fairly.

“From the mere fact that the farmers didn’t accept the 51 cents, then that means that we are not accepting their deadline. I think that it is a total disrespect for them to come and say we will give you a deadline until August 1 if you accept this, then we want to have a clarification with regards to who is the owner of the product.

“I believe that is the reason why we are in negotiations, and we should finalize our situation first, in which we have been asking them [BSI/ASR] for a payment for our bagasse from last year when we started our proposal. At the magnitude of the matter, I think we need to be very clear, frank and respectful to each other so that we can end up with a win-win situation for both of us,” Ortega said.

Ortega mentioned that farmers know that they can get more than just 51 cents per ton of bagasse, and they want to be assured that they will receive a fair payment for their product at the end of the day.