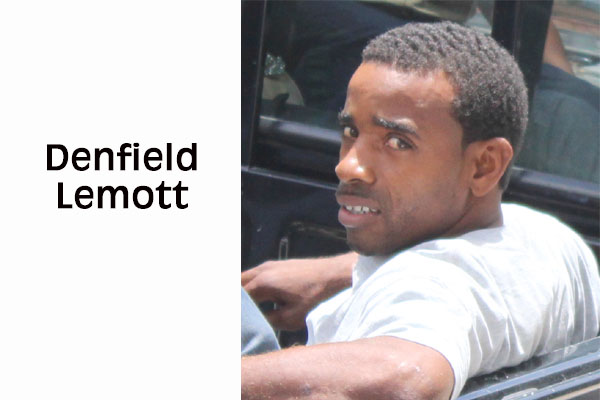 A convicted burglar, Denfield Lemott, 35, a resident of #20 Racecourse Street, who is serving a five-year sentence for burglary, was convicted on a second burglary charge on Wednesday when his trial ended before Chief Magistrate Ann Marie Smith, who imposed a seven-year sentence that is to run concurrent with the five years he is serving.

The new prison term means that Lemott will have to remain behind bars for two more years.

The burglary incident occurred on January 13, 2013, when Lemott entered the office of Pauline Griffith, a nurse at the Cleopatra White Health Center, and stole a wallet containing $100.

According to Nurse Griffith’s testimony in court, she had left her office to go to another office in the building, and when she returned, she saw Lemott in her office.

When she inquired of him what he was doing in her office, Lemott replied, “I di wait.”

The nurse told him that he should wait outside. But when he was walking to go outside, Griffith said that she observed that her wallet was protruding from his back pocket.

Nurse Griffith said when she saw her wallet in the back pocket of Lemott’s pants, she grabbed him and they got into a struggle.

Griffith’s shout for help was answered by a security guard who was on duty. The security guard apprehended Lemott and held him until the police arrived.

In his defence, Lemott denied the allegations and said that it was a co-worker of Griffith who told him to wait inside the office. He denied taking the wallet with the $100.

Lemott is serving five years for a similar offence that occurred last year, when he walked into the office of the secretary of a Supreme Court judge and stole a purse containing money.

In that incident, the secretary returned just in time to observe Lemott leaving her office with her purse in his hand. He began to run when he saw her, but he was pursued and apprehended.

Before he was apprehended, he was observed attempting to hide the purse on the Holy Redeemer School compound.