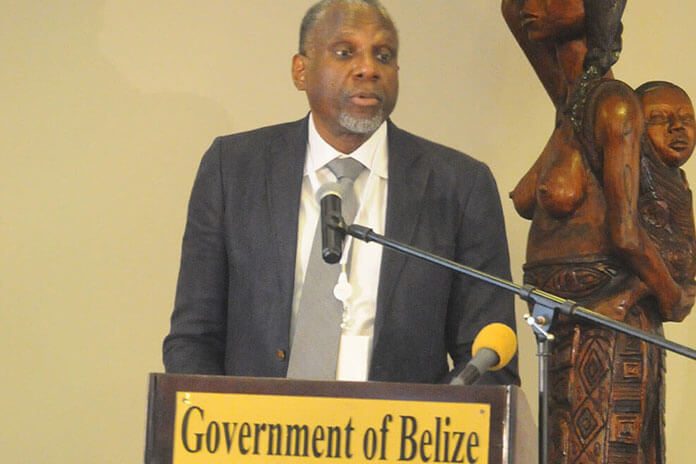 Opening ceremonies were held this morning for the 6th Biennial Caribbean Association of Judicial Officers (CAJO) conference at the Biltmore Plaza Hotel under the theme “Judicial Integrity — the Pathway to Public Trust”.

Prime Minister Dean Barrow, in his welcome remarks, told members of the legal profession that although complaints concerning judicial conduct are not legion, they are frequent enough.

“Because there are seemingly no ready avenues for dealing with judicial discourtesy”, the Prime Minister said, “This has caused some people to ask the age old question, ‘Quis custodiet ipsos custodes?”

“But for the purposes of today’s intervention, I content myself merely with reminding that the confidence we must be able to maintain in our judges is confidence in the round, it must therefore encompass propriety … in matters of deportment and temperament,” he said.

“It gives me immeasurable pleasure to join the Right Honorable Prime Minister in welcoming you all, visiting judicial officers from the Caribbean, Africa, Europe, Canada, and the United States to Belize, on the occasion of the 6th Biennial Conference of the Caribbean Association of Judicial Officers. Today is a historic day in Belize, for never before have so many judicial officers gathered within its shores. This day will surely be recorded in the annals of the history of this beautiful land. CAJO’s main goal is to provide continuing education to regional judges,” Chief Justice Benjamin said.

To a large extent, Belize has become quite a litigating country; there are, however, many factors which have contributed to the decrease in the public’s confidence in the judiciary, but the primary one is the amount of time litigants and accused persons have to wait for justice.

The keynote speaker for CAJO’s opening ceremony, Dr. Terrence Ferrell, who is also the chairman of the economic advisory board for Trinidad and Tobago, has researched and noted the decline of public confidence in the judiciary across the Caribbean since 2007.
Highlighting the scholarship that has been done in this area, Dr. Ferrell referred to the World Justice Project, “…which looked at rule of law and computes a rule of law index for countries around the world.” “And there’s a ranking of countries; we have rankings for Jamaica, Barbados, Guyana, Trinidad & Tobago, St. Lucia and St. Vincent. They’re scoring the rule of law and there are several components in index and the three of those components are relevant, I think,” he said.

He went on to state, “One is the question of the absence of corruption in the judiciary, and we do well, all of the countries in the region, do well. I have put up the United Kingdom in the last column there as a comparison, and you’d see that from in terms of the people’s perception of the absence of corruption, our countries do well, but in respect to the delivery of civil justice and criminal justice, we do not do very well at all. World Justice Project rule of law index — that particular survey actually surveys people like attorneys in the various countries.”

Dr. Ferrell said, “And finally, we can point to the global competitiveness report which surveys business people, and the global competitiveness report has again a number of different components, including what they call institution pillars, and within the institution pillar, there is a question about two aspects which relate to the question of the judiciary and justice system.

The CAJO conference, which will run for three days, will cover topics such as pre-trial detention and judicial reform, gender sensitivity and adjudication. There will also be sessions on the developments in the rule of law in the Caribbean, and the rights of indigenous people; they are a part of the twenty topics that this year’s CAJO conference will feature.