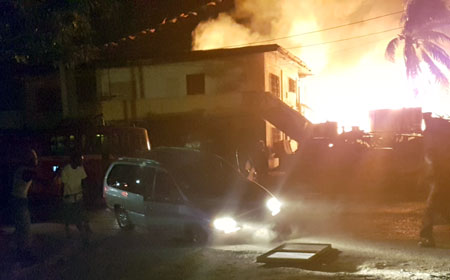 The fire began sometime around 9:35 tonight, Wednesday, and in the face of great challenge, firefighters managed to get it under control by around 10:20 p.m.

When the first fire truck arrived on the scene, it apparently arrived without enough water.

Firefighters subsequently removed the metal grill cover on a manhole in order to access water, but it was apparently dried up.

They immediately abandoned that manhole and went to another, from which they were able to suck water. However, they failed to properly cordon off the area, causing an unsuspecting van making its way onto Partridge Street to fall into the first opened manhole.

Firefighters and passers-by had to lift the van out of the hole.

Despite the huge flames and black smoke being belched from the burning rubbish in the yard, the cement structure of Carter’s Upholstery remained undamaged.

Amandala understands that this is not the first or the second time that there has been fire on this property.

Amandala tried to locate Darrell Carter, the owner of Carter’s Upholstery, but our efforts were unsuccessful.

We also contacted the National Fire Service Department, but we were told that more information would be available tomorrow, Tuesday.