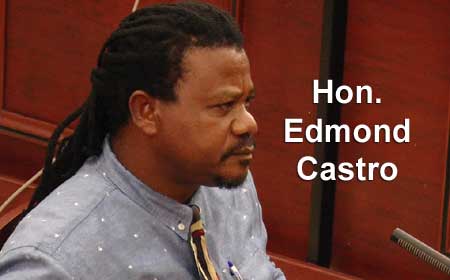 BELMOPAN, Wed. July 5, 2017–In her testimony before the Senate Select Committee, Alvarine Burgess accused Cabinet Ministers Anthony “Boots” Martinez and Edmond Castro of being involved in a visa hustle at the Immigration Department.

When he appeared before the committee today, Martinez denied the allegations made against him and so did his UDP colleague, Castro, who had sued Burgess almost four years ago for defamation but withdrew the case, reportedly after being advised that the ruling might not be in his favor.

Today, Senator Elena Smith would press Castro for more answers into the allegations made against him by Burgess. Here is an excerpt from the exchange that took place:

Smith: “Ms. Burgess was here and you know she has made certain accusations with regards to her involvement with yourself and applications for visa. Are you aware of her testimony?”

Castro: “I know that she is a liad woman and she been telling lies for a very long time.”

Smith: “She has said that sometime around 2013 that she had asked you to provide recommendations in support of visas for Asian nationals. Is that so?”

Castro: “Ms. Burgess approaches (sic) me twice and I said this from the beginning, I helped her with one letter. She asked for a letter to be signed because somebody wah help ah with some money fi kerre eh husband weh mi sick da Guatemala for medical treatment…About couple weeks after she came back, the treatment was not well; she need fi go da Merida. I signed another letter for her. That was the extent. I said that from Jump Street.”

Smith: “Any of those times did she pay you for those recommendations?”

Smith: “She also said that her interaction with you resulted in about 200 applications being processed. Are you aware?”

Castro: “No such thing. Is that in the report?”

Smith: “As I said to you earlier, Minister, I am asking you questions firstly based on her testimony.”

Castro: “Suh we wa continue deal with hearsay? Ah nuh want sound rude, but yuh wa continue ask me questions weh deal with somebody from hearsay, weh mek accusation about somebody else.”

Smith: “She was saying that about 200 applications were done.”

Senator Michel Chebat also took the opportunity to quiz Castro on the allegations made against him. However, Castro would resort to personally attacking him. Here is what was said:

Chebat: “You were actually involved in a court case with her, weren’t you?”

Chebat: “It has to do with the fact that Ms. Burgess has come to this inquiry and has made certain statements and I am trying to determine if what she said was true or not. So the case that you brought against her is directly relevant.”

Chebat: “I am absolutely sure.”

Castro: “Well I nuh see nothing about the case that I took her to court in the book, or nobody inform me of that, and so I cannot answer that, and I nuh answer that.”

Chebat: “Suh you don’t know if you took her to court?”

Chebat: “So you took her, or you didn’t take her?”

Chebat: “And you took her because she had made allegations of this visa thing with you, right?”

Chebat: “And how did that go for you, Minister?”

Chebat: “Did that case end in your favor?”

Castro: “If you want that information, I believe you need to go to the court, where that hearing was done.”

Chebat: “So you don’t know if it ended in your favor?”

Castro: “I refuse to answer that.”

Chebat: “Were you made to pay cost in that court case?”

Chebat: “Well unfortunately for you, I get to ask the questions today, Minister, and so my question to you is, did you have to pay Alvarine Burgess in the case you instituted against her at the Supreme Court?”

Castro: “I will not answer that cause I don’t need to answer that.”
Chebat: “Isn’t it true that you had the court order you to pay her 30 thousand dollars in cost?”

Castro: “I refuse to answer that, thank you.”

Chebat: “So when Alvarine said that she paid you 2,000 dollars per recommendation, she’s lying?”
Castro: “I think that da PUP smoke.”

Chebat: “Wasn’t that part of your case with her?”

Castro: “That’s PUP smoke. You guys are so desperate to get into power you are trying to create fire when there is no fire.”

With that the committee turned to the Auditor General’s audit of the Immigration Department which named Castro for his Ministerial interference in the department’s work.