Central American countries will try to crack down on international crime 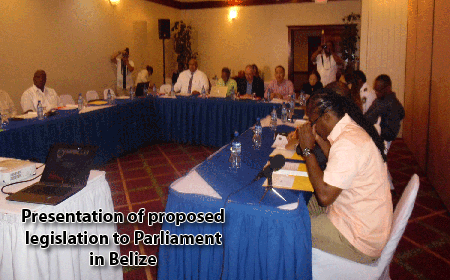 BELIZE CITY, Thurs. Jan. 21, 2016–Efforts are being made by various Central American countries to coordinate their efforts and harmonize their laws in order to crack down on crime (particularly money laundering and weapons trafficking) as a unified body. Today, at the Belize Biltmore Plaza officials from the Forum of Presiding Officers of Parliaments of Central America and the Caribbean Basin (FORPREL) presented proposed legislation to the Speaker of the House of Representatives and the Senators of the National Assembly of Belize.

Rafael Donis, a consultant who spoke at the seminar, commented, “Nowadays, there is no regulation of the marking of the weapons, and marked ammunition serves a good purpose when we are doing investigations. When we go to the scene of crime, if those shells are marked, you immediately start a process of who imported it, who sold it, to whom it was sold. As a result, in a matter of hours the case can be solved.”

Donis further proposed that in instances in which a person is found with an unlicensed firearm which was not purchased from a legal firearms dealer in Belize, and there is no documentation of legal importation of such a firearm, then it can be inferred that that person is involved in the trafficking of firearms.

Donis pointed out that Belize’s legal system is different from those of the rest of Central American countries. Further, he said that Belize needs to enact laws that are in conformity with those of its neighbours, since there could then be a common, unified approach to dealing with international crime. Donis pointed out, “The usual way for criminals to operate is to find the country that has the least amount of laws and then they use those countries to set up shop.”

Donis noted that there have been few convictions for the crime of trafficking weapons because there must be evidence of when such weapons entered the country and where they were headed. He added that it is important for the law to define what is weapon trafficking. Therefore, he suggested that in cases where the “weapon was not imported and not registered legally and it is found within the country then it is trafficking.”

Dr. Alejandro Aguilar, a consultant who spoke on money laundering, echoed Donis’ statements on the need for Belize’s laws to conform with those of the other Central American countries by stating that there must be “harmonized legislation” among the countries where money laundering is concerned. Aguilar said, “The legislation would ensure means and mechanism for the prevention, the detection, investigation and sanctions for the crime of money laundering.”