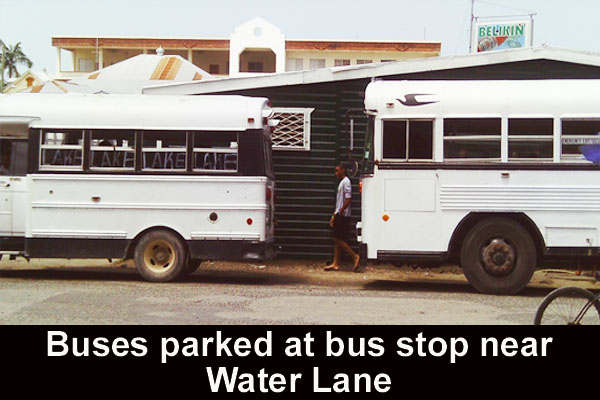 Amandala has been told that after a second meeting held today, Thursday, September 5, Philip Jones, CEO of Belize Transit Services, has gotten a 4-month extension from the Belize City Council to continue using the big buses under the condition that the bus operators make arrangements to comply with the regulations put in place by the Council.

Jones said that they were also offered an additional 2-month grace period if they are not able to meet the bus size requirements at the end of the four months. The meeting today is subsequent to another meeting that was held on Tuesday at City Hall.

Earlier this week in our Tuesday issue, Amandala reported that several large buses were impounded by the Belize City Council because their size was not in compliance with CITCO’s policies in regards to the city transport guidelines. The bus drivers were upset because they were not able to conduct their regular runs on an exceptionally busy first day of school in Belize City.

For their part, the City Council said that Belize Transit Services, which is in charge of the buses, had been forewarned from as far back as 2009 that the size of the buses had to be reduced.

This caused a flurry of phone calls to the local talk shows by members of the public who were affected by the change and said that the bigger buses are needed, especially for the Fabers Road route.

The public outcry was followed by a meeting on Tuesday morning, involving the City Councilor with responsibility for traffic, Alifa Elrington-Hyde; Traffic Manager, Kevaughn Jenkins; and CEO of Belize Transit Services, Philip Jones. They met to work out a proposal on the way forward for the bus operators.

After the meeting, Jones told KREM TV News that he believed that the Councilor and the Traffic Manager were very professional in that they listened to his concerns, and so he was very optimistic that they would allow the bus operators an extension.

He said that the objective of the meeting was to both receive an extension for the big buses to continue their usual runs, and also to negotiate the sizes of the buses that will be needed to effectively manage the timely transportation of the commuters who use the bus services.

Jones mentioned that the meeting went very well because he was able to stress his concerns to the Councilor and the Traffic Manager, and secondly, because they also established a partnership to reach an amicable solution.

According to Jones, up to Tuesday, they had only been allowed to run until 8:30 a.m. to facilitate students and workers. He said that at that time, it was not yet confirmed or finalized if they had been given the extension that they were seeking. He indicated that he was awaiting the outcome of further meetings to find that out.

CEO Jones conceded that Belize City is growing, and therefore he is more than willing to comply with the regulations and changes required for growth. He stated that the bus operators don’t intend to be a detriment to progress in the city, but at the same time, he was basically asking the council and councilors to grant the bus drivers some sort of an extension so that they (the bus operators) can provide normal service until a later date.